Revolt in Chile – A whole country against neoliberalism

On the ground report

Check it out
You are here: Home / Antiauthoritarian Movement / We must resist opression – We must defend Exarchia as neighborhood of solidarity

There will come a time we shall rise
as the leaven dough does
the iron burden will brake
your mountains, like the heavy clouds, will disperse
the worlds will tremble and squeak.

For everyone in the Exarchia neighborhood, the new permanent police presence in Exarchia has changed something in our daily lives. The only ones who remain intact in their business are the drug traffickers and the mafia, even if the repressive forces are a few meters away. Until now, those who have suffered are 150 refugees, women, children, infants and men. Therefore, it turns out that the offensive against the Exarchia neighborhood, according to the long-announced “Law and Order” policy, is simply vindictive and does not target the drug traffickers, as claimed by the new government.

The offensive against the neighborhood, escalating daily with its enclosure, the evictions of squats sheltering immigrants/refugees and solidarity structures, the unjustifiable arrests and abductions, the racist and sexist practices of the MAT anti-riot police units against transient residents and visitors alike, have the absolute goal to intimidate the residents and to establish a climate of terror. Everything is designed and executed according to a short term along with a long term goal:

• Terrorize the inhabitants,force them to abandon the neighborhood in order to carry out a grandiose lightning war operation against all the resistance strongholds, such as self-organized free social centers, where structures are housed that facilitate creation, culture and solidarity.
The broader plan is supported by the overall upgrading of the legal framework for repression, the creation of special arrest squads, the abolition of university sanctuary (asylum) which was established after the downfall of the dictatorship in 1974 and the restriction of labor rights and freedoms.

• The long-term goal is to “clean up” the “rubbish” from the neighborhood, and to force it bringing the gentrification and its surrender to real estate or the golden visa pile of airbnb tourism, to bury Exarchia and its history. At the end of the day the goal is that no one will remember this neighborhood of disobedience, solidarity, self-organization and culture. No one will remember that in our neighborhood as a practical resistance against the memoranda, emerged the first social wards, the solidarity kitchens, the hubs of culture, self-education and creativity, the self-organized playground and the Navarino park, etc.
No one will remember that in our neighborhood the desperate of our time found shelter, food, care and reclaimed their lost dignity.

We call on every resident, working person and friend of our neighborhood to participate, join and fight in a massive, unifying struggle against the escalation of oppression and the police-state that starts from Exarchia in order to expand against every person in society who strives for dignity and solidarity, treating him as a “criminal”, a “suspect”,or an “internal enemy”.

We all fight together : residents, employees, friends and collectives of Exarchia . We are taking part in the demonstration against repression 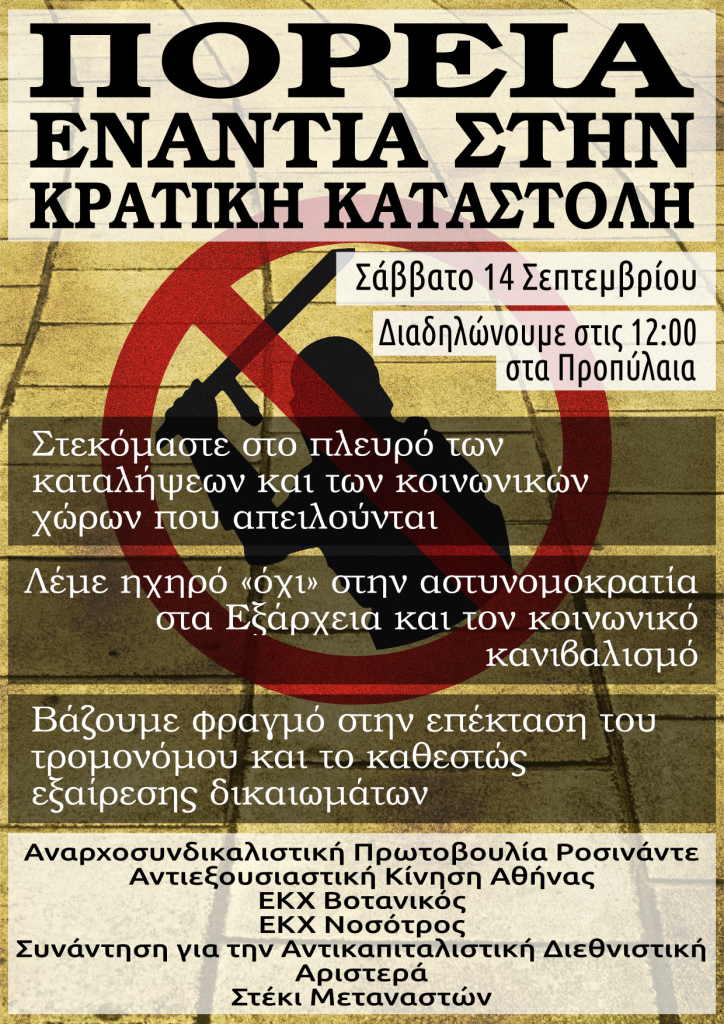 For further read the text from our comrades from Antiauthoritarian Movement:

State has its continuity in Violence, exclusion
and the politics of Death.

The government that represents the Greek Industrialists Association, the CEO’s of non-productive Companies, the wealth hustlers, the scavengers of a particular Balcan type; that government declares emphatically the doctrine of “Law and Order” along with the other one of “Zero Tolerance”. Having already scheduled the privatizations the actual neo- liberal economic planning is within its intentions. Already in the Ministry of Public Order the concentration of power and the Statist logic became apparent. Everything ! Prisons, Immigrants, political opponents, social movements, collectives are under the direct control of that Ministry (ex-Citizen’s Defense). As for the rest like the Secret Service, News Agencies, Mass Media, all are under the surveillance and control of the Prime Minister’s Office. The Deep Greek State is returning in its past looking towards the future while it imposes the modern Statist Totalitarianism through cruel managing and governing.

Just to make things absolutely crystal clear they placed Chrysochoidis at the head of the Ministry, the pure representative of the Deep State, the protector of greek capitalism, the one who created and organized the motorized assassins of the Greek Police, the same one who recruited and broadened the Police Repression.

Apart from Chrysochoidis who ensures the continuity of the State as an eternal model Minister of Public Order, also the managers of SYRIZA already performed their duty showing their Statist Autocracy and Oppression when the police invaded the Squats which gave Shelter and Hospitality to Immigrants in Nikis Avenue, Thessaloniki (something that we will never forget), the Squat Orphanage in the Touba area and in C. Deal Str. at dawn on Wednesday July 27th, 2016 ; as a result immigrants and people of the movement who supported showing their Solidarity, were arrested in mass.

Just recently by order of the same Ministry but from a right wing Government, everything leads us to understand that they are preparing to

evict the Squats Sheltering Immigrants, starting from the Symbol Squat of NOTARA 26. The Notara 26 Squat Sheltering Immigrants was the very first (since September 2015) Squat which gave Shelter and Hospitality to Immigrants and Refugees and at the same time it was a political proposal in the context of Solidarity by creating a free space and denying in practice the state of exclusion of the State and the status which was imposed on immigrants. It was during that time when hundreds of thousands crossed the Aegean Sea and the ones who managed to survive the waves faced not the Benevolent State but a whole Society which in majority was showing its Solidarity to the refugees of the Aegean.In those circumstances Notara 26 was created ; more than 9.000 men, women, children, invalids, LGBT’s found shelter in one refugee community while at the same time food and other products were equally distributed to the local “damned” population.

“ In that asphyxiating context we decided to Squat the abandoned building of ETEAM in Notara 26 Str. intending to create a space for our Solidarity towards the immigrants/refugees in order to take care of their immediate needs (shelter, health care and every other kind of support). That is not an action of Charity, private or public, but a self-organized solidarity venture where the activists and the refugees decide together. The open Assembly is the institution that decides and everyone can participate men, women or other without any exceptions.”

That was at the time and it is still, our commitment for that Squat and it holds us till that day responsible, so we will defend it with no concern for the cost.

The movement has also continuity in Resistance, Solidarity and self- organization.

Using as a pretext Exarchia and everything that happens in that neighborhood – some are a result of the capitalist nihilism of individualism and the rapture of social bonds – they are ready to attack against anything that refuses to accept that condition in order to reinforce the process of fragmenting every bond, every collective, imposing barbarity, the graveyard silence, the institutionalized privacy and socialization.
In other words according to their own declarations, they are

preparing an invasion against the Anti-Authoritarian Movement, it’s collectives, the Free Social Centers where it’s ideas are practiced. They are promising that by the end there will be nothing left standing. In essence they are searching for a pilot program of Suppression like a blitzkrieg against Society and Nature, against the social, political and individual rights.

Using the Universal being of liberalism, Profit, they are distributing to every Commercial Corporation
every right to transform public space in enclosed money-making districts, every piece of land for all kinds of mining and drilling, refusing at the same time the workers’ and social rights from the local and immigrant population ; thus enabling the investments, the economic growth of all the bloodthirsty tycoons and the robbery of the natural wealth, destroying every balance of the environment with the human population.

The Anti-Authoritarian Movement has already a vivid history of multi- level and multi shaped struggles. It is an always contemporary Movement, having its own political, social and cultural presence. A Movement with hundreds of political prisoners that defined the resistance movement against every Authority, against every government. This Movement which never abstained from any social protest, is placed once more in the epicenter of a new Suppression from the managers of Power. Today as never before it must – as we must – build a Barricade against the State Offensive.

We must uphold the Anti-Authoritarian Social Front of both the desire and the need to Resist and Fight Back. A Front open to Society, the working people and all those who are suffering from the gangster style capitalist barbarity.

A Front Everywhere to Resist against Suppression.
For the defense of Free Social Spaces
For Solidarity to Immigrants and Refugees
Resistance against the Ecological Destruction caused by mining and drilling

For the Defense of the University Asylum
For the Struggle against the Anti-Social Reforms and for the Working Peoples Rights.