Check it out
You are here: Home / ...ums Ganze! / Dresden #Unteilbar August 24th: Defend solidarity! United against racism and fascism

This weekend in Dresden, Saxony a big by Unteilbar (“indivisible”) coaltion demonstration against racism, fascism and the rightward shift in society will take place. As part of the anti-fascist campagin “Nationalism is no alternative” umsGanze calls to join the demo.

Join the Defend solidarity – United Against Racism and Fascism bloc.

…ums Ganze! call for the germanwide anti-racist and anti-fascist big coalation demonstration of #Unteilbar on 24.08.2019 in Dresden, Saxony:

Against the status quo and its further deterioration 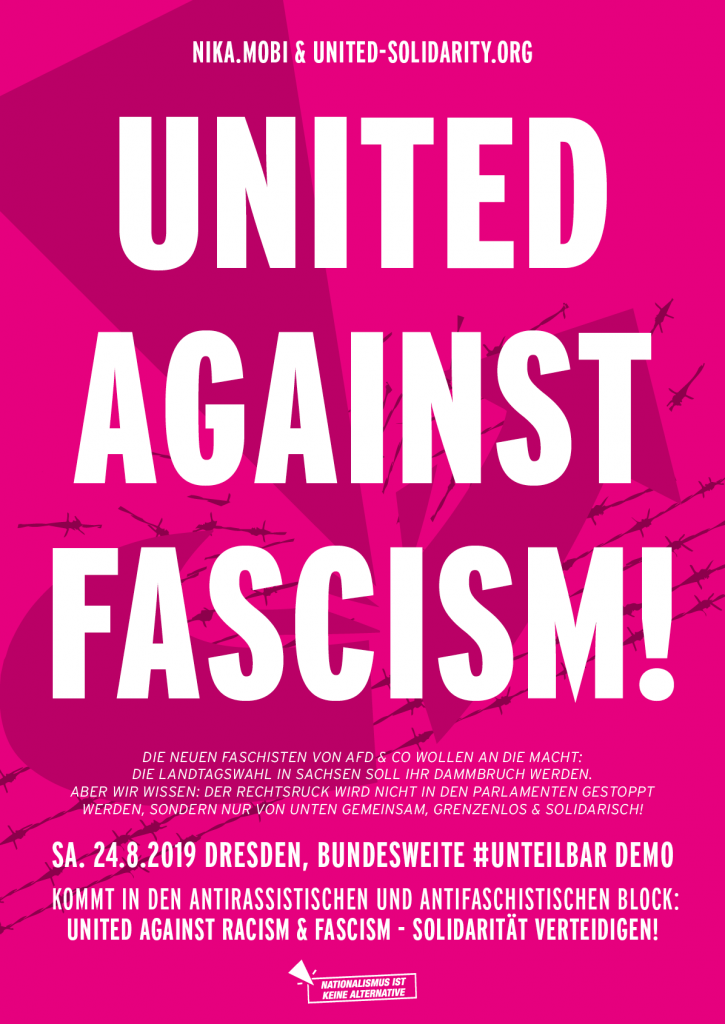 At the gates and harbours of Europe the mass dying continues daily. Inside the fortress, the fascists are busy writing death lists and packing their ammunition boxes. That is the situation in which this autumn in Saxony, Brandenburg and Thuringia new county parliaments will be elected. And the expected results mean a not unlikely government participation for the AfD (Alternative for Germany).

The composition of the AfD, consisting of Burschenschaften (male-only völkisch student fraternities), “Identitarians”, mens’ rights activists and former politicians of the conservative party CDU, is on the one hand only an expression of reactionary ideologies. But everyone who wants to know is aware of it: The AfD is the organisational centre of a new fascist movement. Its rise is also the result of an undead neoliberalism, whose perseverance slogans are no longer effective. Merkel and Macron still have many fans, but their hegemony is challenged from the right. All the glamour is gone and the contradictions are coming to a head. Social insecurity has become a permanent feature of a precarious full-time employment society and the distribution of wealth is polarising from year to year – the trend is towards second yachts and forced evictions. The necessarily produced exclusions are countered with the classic ensemble of security: order, state power, and social problems are to be solved by the police. At the global level, neoliberalism, although crisis-prone, continues to cause far greater misery as it is advertised without alternative. Not only the distribution of wealth, but also the first consequences of climate change, civil wars and epidemics affect people in the southern hemisphere more frequently and more severely. Aggressive exports, neocolonial exploitation and the overexploitation of natural resources are the foundations of our way of life – whether it is characterised by luxury cars or cheap meat. We do not live at our own expense, but at the expense of others. A slogan of past Refugee protests summed up the connection between the imperial way of life and the causes of migration and flight: “We are here, because you destroy our countries!”

All this unnecessary suffering is at the same time a necessary element of capitalist production and the policies that organise the framework of accumulation. In this country, these are first and foremost the grand coalition leaders of the SPD and the CDU. Thank you for nothing!

But with the multiple crisis of politics, economy and environment (world-wide) new keyword providers step into the limelight. The AfD and other reactionary forces bring new dynamics into politics. The right-wing hegemony project promises to bring order back to the shop or, in case of doubt, at least to secure the privileges of the northern hemisphere in a racist way. The neoliberals, for their part, are more authoritarian and racist than usual. Whether they do this because the time is right, or whether they feel compelled to do so in order to at least survive the current legislature, does not matter in consequence.

The AfD takes up the frustration experiences of capitalist everyday life, but denies the contradictions that underlie them. Their success cannot be explained by the theory of impoverishment, and no one chooses the AfD because of its (non-existent) socio-political promises. The AfD rather shifts conflicts to another terrain and culturalizes and ethnicizes them. Those who speak of the “Volk” do not speak of classes. They are concerned with the interior worthy of protection and threats from outside.It conducts national politics, represents German-national historical revisionism, wants to ban gender studies and antifa, denies climate change, wants to deprive single mothers of their financial basis and, if necessary, shoot migrants at the border. The party says all this openly. For it’s cultural struggles it can start with the bizarre mainstream understanding of many and often only has to slightly sharpen a already hegemonic opinion. After all, identification with the nation promises orientation in confusing times. The distinction between a population of service providers and taxpayers to be protected and the rest exposed to repression and job centres can also be continued.

Although the new fascism presents itself as an alternative to the neoliberal status quo, it is rather its product. It is the result of the omnipresence of capital, which makes it the only possible world – also because no desirable alternative seems to be available.

So far, so bad. But the complete description of the situation also includes the fact that in the last weeks and months we have taken to the streets in the movement for save passage and the right for migration (“Seebrücke”), feminism and climate justice and have put ourselves in the way of the fascists wherever we could. We do not need new police laws, but circumstances that do not constantly marginalize and criminalize people. Nor do we need a division into multicultural urban milieus and villagers in regions devastated by capital, but free trains that bring us together. It is about infrastructure, not habitus. And we need housing – To live and not as investment objects.

But unfortunately our struggles remain mostly isolated. As antiauthitarian leftists, we cannot afford this in view of the historical situation. It is now important to be indivisible in our everyday struggles and for example to work together as anti-fascists with anti-racist structures or to visit the people in Saxony not only every two years to a big event. Because Saxony is not the stuck right-wing conservative past, but an experimental laboratory, which gives a view into a possible fascist future, in which there is nothing to laugh about for migrants, leftists or women. This laboratory – to stay in the picture – has to be destroyed.

It is not enough just to fight urgently needed defensive battles. So that we don’t misunderstand each other: Of course it is necessary to be active against fascists, always and everywhere, on all levels and with all means. But as antiauthitarian radicals we must be indivisible and have the courage to transform the politically heated situation into another polarization. Beyond undead neoliberalism on the one hand and fascist fantasies of awakening on the other, we must show a credible real alternative. We need a project! But As leftists we have a harder time than fascists. Because the project of fascism is not a project, in the sense of a draft of the future. Gauland, LePen and Salvini offer as the cultural horizon the way of life from the 1950s if not worse. Trump, Orban, Erdogan and Bolsonaro show us how via enforced conformity in media and universities this project should be realized.

We, on the other hand, want the Internet in the hands of Workers’ councils with no state and no capital, we want the whole bakery. The much praised democracy also in questions of economy and ecology. Otherwise the coming generations will probably have to fight for the last fresh water supplies on a planet devastated by climate catastrophes. We want to sleep longer, work less. Open borders on earth and between genders and a life without fear for all. Luxury for all instead of poverty when you grow old . Communism for future.

So come with us to Dresden on 24 August and show solidarity with your comrades who are raising the flag in Mordor. Against neoliberal conditions and new fascism – For a completely different whole thing!

Do not be afraid! The future belongs to us when we fight. Together indivisible, in anti-fascist solidarity.