Check it out
You are here: Home / ...ums Ganze! / “Now it’s all about knocking down baby hitler!” – Interview with antifa vienna on the ibiza scandal

Interview with afa [w] – autonomous antifa vienna, member of …ums Ganze! and Beyond Europe, on the situation in Austria.

1. I think many of us know. But tell us again in ten short sentences what the hell is going on in Austria?

In a nutshell, one could say that two of the most important leaders of the extreme right in the Banana Republic have embarrassed themselves enormously. In a conversation with alleged donors from Russia, HC Strache (Vice-chancellor) and Joshi Gudenus (FPÖ Vienna) promised them to sell Austria’s biggest newspaper (“Krone”) to them and also to secure orders from the Ministry of Infrastructure. This seven-hour dinner (apparently a code word for vodkacoca party) was secretly filmed and published two years later, forcing the two to resign. Baby hitler* Kurz had initially offered to continue the government, but without Interior Minister Herbert Kickl. The FPÖ, on the other hand, did not want to play along and so all FPÖ government members resigned. Shortly afterwards, “experts” – whom he himself had chosen at his discretion – went to the ministries. Now we are all waiting to see whether a no-confidence motion announced on Monday will get a majority in parliament and also force Kurz to resign.

2. This trap… – quite obvious antifascist action or not?

3. Will the fascists and neo-liberals manage to talk their way out of the story once again?

Shortly after Strache announced his resignation, he intervened again via Facebook and announced “Now more than ever” in the style of the known Nazi Waldheim. Of course a bit cryptic, but just broken down Strache emphasizes two things: “I wor bsoffn (I was drunk) and the Jews are to blame”. The fact that in the presence of an “attractive oligarch,” after one or two little lines and four to ten vodkaenergy drinks one tends to boast of adolescence, is understandable to the core voters of the FPÖ and appeases them. The fact that an ominous foreign power has pulled the strings is also obvious to every average anti-Semite in Austria. One who for the time being emerges more strongly from this situation is Sebastian Kurz, the nation’s school spokesman, yet the authoritarian project “Schwarz-Blau” (Black-Blue) has failed for the time being.

4. Are the political balances of the European elections changing in Austria and throughout Europe? And who will ultimately benefit from the scandal?

According to initial estimations, the European right-wing parties will not lose for the time being, and it is difficult to predict how the FPÖ will perform in the election. There is a realistic danger that Babyhitler will now try harder to get the FPÖ voters into his boat; he has long since adopted the hostile program of the FPÖ. He himself is pleased that the normalisation of right-wing extremism is beginning to bear fruit: “Much of what I am saying today was massively criticised three years ago and dismissed as right-wing extremist, that has changed”. According to him, “leftists to communists” profit from these scandals and he warns against a political shift to the left in Europe… a real optimist! 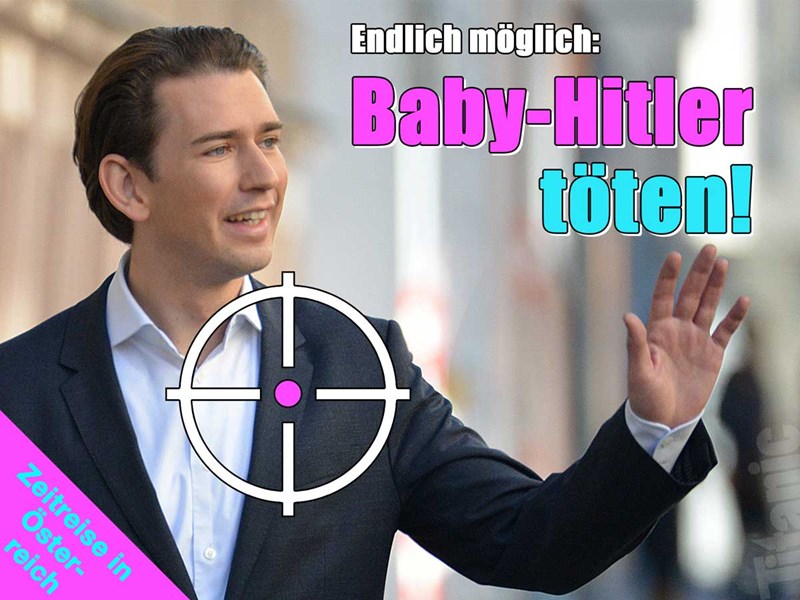 5. How does the left and the anti-authoritarian space in Austria react?

It should be emphasized that on the day after the video was published, thousands gathered in front of the Federal Chancellery to articulate their anger and celebrate Strache’s political suicide. The joy over the resignation of the former Neonazi vice-chancellor is justified, but it must not be forgotten that nothing has changed in the political environment and the current right-wing hegemony. The parliamentary left hardly reacts and is weaker than ever, the “state left-wing style” Federal President Van der Bellen worries about the image of Austria and its economic site and many leftists babble something about the stability in the country, which must be secured and misjudge that we should shake the conditions. But emancipatory demands can be heard from the street, especially from the “Thursday Demo”, which is not satisfied with the current resignations. They want to “chase away” Kurz and open a perspective on a good life for all, after this system has been overcome.

6. According to your Instagran page you have been protesting against Kurz, Strache&Co since the formation of the government. Is Ibiza the crowning highlight of the campaign?

Definitely a success and it even helped the Vengaboys, who are currently number 1 in the Austrian charts (laughs). No, but seriously, now it’s all about knocking down babyhitler!

7. What should the progressive forces think of this dispute among fascists and neo-liberals? And can the announced new elections change something fundamental or will everything remain the old way?

As we have already pointed out, it is of course a cause for joy if such a government project breaks down. But the progressive side has not yet gained much. We must now consider how we can further open up the cracks that have arisen in order to make visible a concept of society based on solidarity. In this sense, we hope that the much-used term of recent days will come true: state crisis!

*Titanic magazine published some time ago a cover calling Austrian Chancellor Sebastian Kurz “baby hitler”. Kurz than tried to forbid the use of this name by court decision. At the end Titanic won the court case!