Check it out
You are here: Home / Featured / Libertatia in flames

In Greece, right-wing and extreme right-wing groups called for a nationalist mass demonstration against Macedonia. Under the protection of the Greek riot police units MAT, Fascist groups attacked occupied houses and burned down the anarchist squat Libertatia. The article was first published in German at re:volt mag. 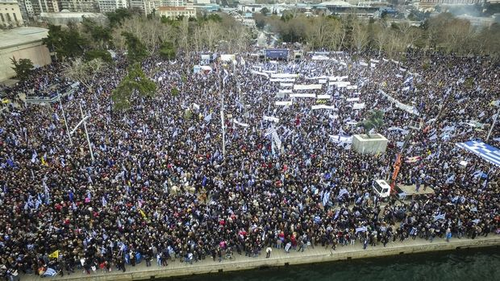 The conflict has been going on for decades. Tens of thousands of protesters today participated in the nationwide rally demanding that the term Macedonia not be included in the name of the Former Yugoslav Republic of Macedonia (FYROM). Greece should by no means allow this because it would discredit Greek history and contribute to the destabilization of the region. The last major nationalist gathering with hundreds of thousands of participants on the same topic was last held in 1992. At that time in 1991, that was in the midst of a nationalist uprising against the establishment of the small neighboring state after the end of the Yugoslav war. Because of the smoldering (continuing) dispute with Greece, Macedonia entered the United Nations with the cumbersome name Former Yugoslav Republic of Macedonia. Since 2008, Greece is also blocking the accession of this country to NATO. In addition, it threatens to block the entry of the country in the European Union. In the meantime, Macedonia itself, at least from the point of view of Greece, relied on a policy of provocation, naming airports and other important places after Alexander the Great and built several monuments referring to ancient Macedonia. Since 1992, the negotiations on the name dispute have been in a standstill, though the UN promoted talks between Greece and Macedonia. The last agreement was between the governments of both countries was in 2006 in Bucharest, Romania, where certain guidelines on a possible name for the country were agreed. The UN mediator in the dispute, Matthew Nimetz, recently stated in New York that he was “very optimistic that the process is going in a positive direction”. According to various media reports, Nimetz is proposing five possible names, all of which contain the word Macedonia, including North Macedonia and New Macedonia.

For days now, the 21 January rally has been staged by various sides: Right-wing parties and organizations, certain conservative and Christian circles, Golden Dawn, football clubs, etc. Well-known personalities such as the composer Mikis Theodorakis clarified in statements and social media posts: “Macedonia is Greek”. Some 300 buses carried people from many parts of the country to the rally. Prime Minister Alexis Tsipras admonished the nationalist madness and promised to achieve a good solution for his country in the coming negotiations with the new government of Macedonia which has indicated they will be more amenable to a reasonable solution than the previous government led by Gruevski. Thessaloniki Mayor Giannis Boutaris positioned himself against nationalist mobilization, as did anti-fascist and anti-authoritarian groups from the northern Greek city. Even in the days before the nationalist spectacle, the latter organized motorcycle demonstrations and rallies to secure a counter public opinion and warn of the emerging nationalist rage. On Saturday night, the White Tower, the landmark of Thessaloniki and the starting point of the rally, was sprayed with slogans such as “Fell asleep as a patriot, woken up as a fascist”. 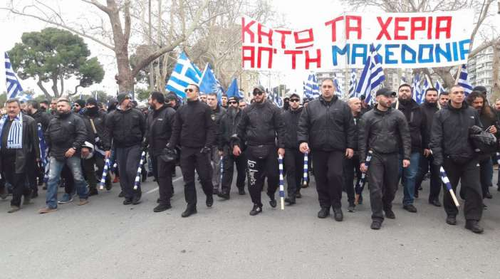 The right-wing organizers of today’s major rally speak of more than 400,000 participants. But certainly they were not so many: about 50,000 people came together in one of the most central squares of Thessaloniki under the statue of Alexander the Great near the White Tower, with flags, banners, and creative and traditional disguises. They included a large organized bloc of the neo-Nazi Golden Dawn party, which now stands accused as a criminal organization in court. This bloc had its own security forces, led by the member of parliament and the well-known cadre Ilias Kasidiaris. Already in the days before, they organized flash mobs and announced the rally on the front page of their party newspaper. On the way to the rally members of Golden Dawn sprayed the party name on the holocaust memorial. Also present were the Conservative Regional Governor of the Region of Central Macedonia, Apostolos Tzitzikostas, Parliamentarians of the Independent Greeks Party and the Center Union Party, numerous former Conservative MPs and Mayors of Northern Greece. 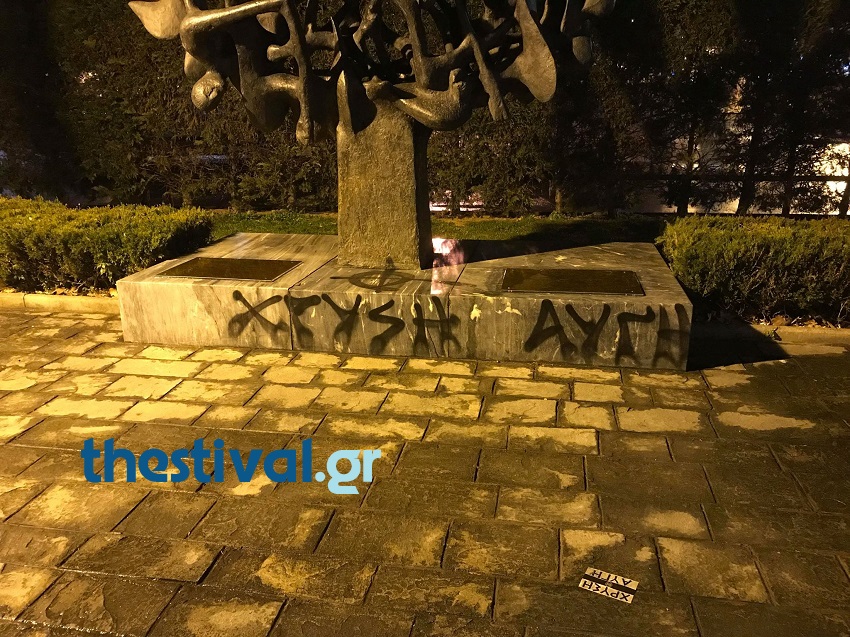 Anti-authoritarian groups warned already the days before about the planned attacks on counter-demonstrators and leftist / anarchist infrastructure. Already on the way to the rally, the occupation of Scholio (school) was attacked under the protection and participation of the MAT units, but was successfully defended by comrades present. During the rally, about 150 hooded people tried to overrun the police cordons and attack the anti-fascist demonstration in the central square of Kamara. The riot police MAT used tear gas to prevent a clash of the two groups. Following the nationalist rally, a group of over 100 people attacked and set fire to the anarchist and anti-fascist Squat Libertatia. According to unconfirmed rumors in social media, the perpetrators were a group of nationalist supporters of PAOK, the fan club Makedones, or from the nationalist groups ProPatria and Ideapolis. . The Libertatia building has now been completely burned down. Motorcycle groups of the Golden Dawn and nationalists were on the streets until late in the night; other occupations are still in high alert. Whether there was coordination between the fascist groups and the football fans remains unconfirmed, but this can not be ruled out. The situation has calmed down by now.

The biggest fears have been confirmed hereby. On Sunday, the streets of Thessaloniki belonged to the fascists and the thousands who protected them with their presence in the nationalist spectacle. The fascists literally moved like fish in the water. The Greek media has been slow in making a connection of the Libertatia burning with the rally. In fact, the largest Greek daily, Kathimerini, dubbed a recent article dealing with the attack on the counter-rally: “Controversy between anti-authoritarians and MAT units.” The next nationalist mass rally will take place on February 4 in Athens on the historic Syntagma Square. Nationalism may continue to live in Greece – Libertatia apparently not.

Libertatia has called for a solidarity demonstration for today, Monday at 18:00. in front of the burned squat.