Check it out
You are here: Home / ...ums Ganze! / A Greeting from the Future

Communique of the “…ums Ganze!” Alliance concerning the events around the G20-Protests in Hamburg 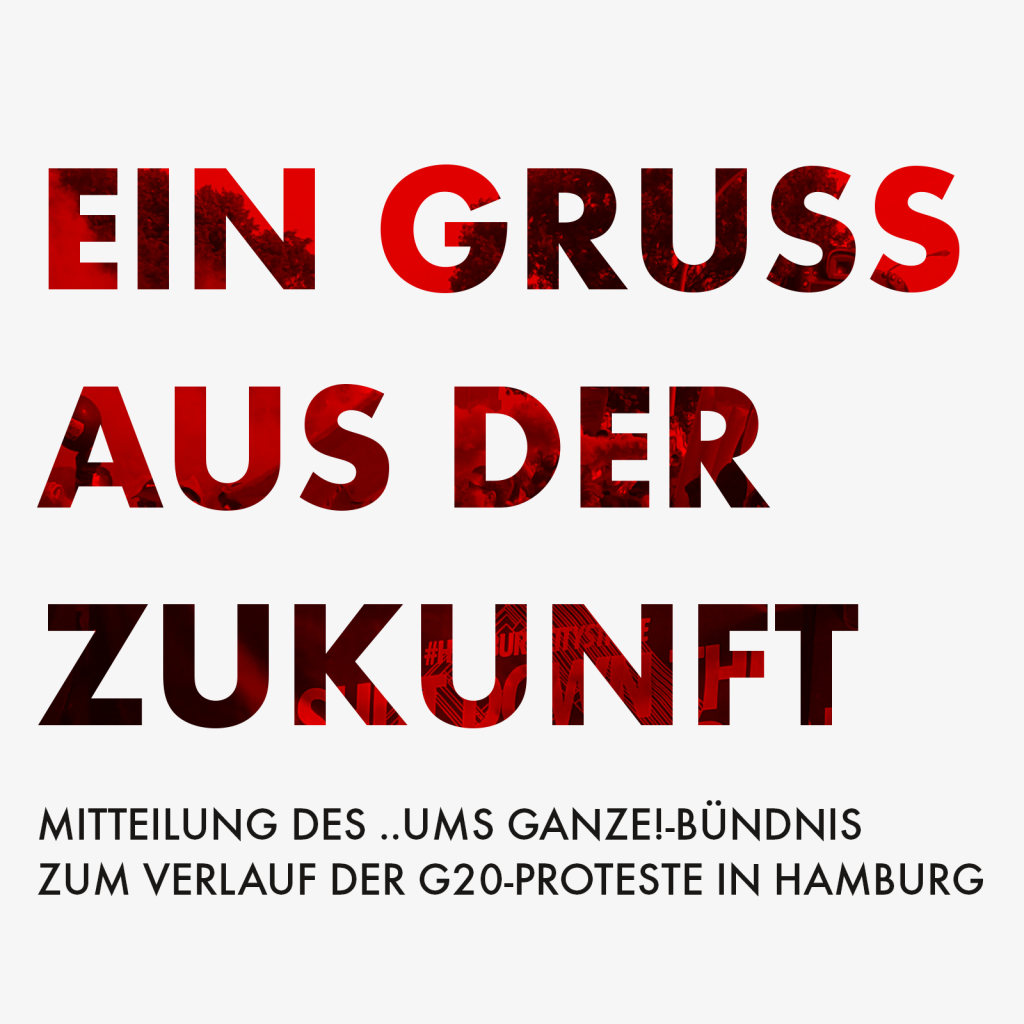 says “A Greeting from the Future”

It’s not as if they haven’t tried. Like never before, the ‘Security Departments’ and the political establishment undertook all measures the bourgeois-democratic state has to offer. All repressive and ideological apparatuses were employed to keep the protests small and under control. Firstly – intimidation, then the restriction of camping, of staying overnight and trespassing, revoking the right to assemble, a coup by the police against the judiciary and the militarisation of the police. The Green Party divided the protest, calling for a rally during the summit, whose focus was not the summit itself but to ‘show courage’ for ‘our way of life’. During the summit, almost 20000 cops under the control of the paid sadist Dudde, with dozens of water cannons, stables of horses and dogs, helicopters, and special commandos with guns followed his bidding. They brutally attacked left-wing campers, autonomous demonstrators, residents, journalists and sit-ins by refugees, leading to several people being severely injured before the summit had even begun. It’s a miracle no-one died. In other words, the Police Operation was in fact a ‘shop window of modern police work’ (Andy Grothe – Social Democratic Party) allowing us a view into the authoritarian turn of neoliberalism in the heart of European capitalism. Alone: All of it didn’t help.

While the Minister of Interior announced all militancy will be ‘extinguished’, people raged for hours; in devotion and joy which had not been seen in a long time. Whilst he announced zero tolerance against ‘banned symbols’, pleasing Erdogan, his business partner in building Fortress Europe, a huge PKK Flag was carried through Hamburg for hours. Where the “character masks” of power demanded labourously to not join the left-wing radicals, ‘despite and because’ of the Friday Riots 80,000 people turned up on Saturday’s demonstration. The official governmental demo saw only 5000 people. And while the Hamburg Port was supposed to be running at all times, the operators will need three days dealing with the ‘backwater caused by blocking’. We could continue this enumeration but what remains is: The strategy of the right-wing SPD Senate, dividing the protest through partial integration and the ousting of the radical part through criminalisation failed. The spiral of escalation which the police operators kept continuously spinning in a self-declared state of emergency exploded into their faces. This goes to show the success of previous movements in Hamburg, culminating in an atmosphere where the slogan ‘The whole of Hamburg hates the police’ sounded more real than staged. Through the wide range of actions we managed, for at least a short time period, to put the third option – solidarity across borders, beyond authoritarian neoliberalism and nationalist rollback – back on the map. All while the world was watching. It is more than a tactical victory, crossing the hypocritical staging of the export world champion Germany as ‘hoard of reason and democracy’.

The variety of action complemented each other, although some prefer to not say this aloud. Without militant actions, neither the blockades nor the Harbour Shut-Down could have been that successful. Overall, the different actions resulted in the image of a #HamburgCityStrike, which is more than just jogging at the fence of the powerful: namely the critique of capitalist domination. For our part, we can say that the logistics of a society that watches people drown while commodities are allowed to flow freely does not only deserve to be blocked but can be blocked. How an anticapitalist practice drawing from this experience, might look like, needs to be discussed in the near future. We must not forget that friends and comrades are still in prisons or in hospitals: You have our solidarity.

Of course, as usual there were some weirdos who prefer to spread antisemitic conspiracy theories and reactionary ideologies but they did not dominate the protest, due to the presence of the radical left. On the contrary: If this is about an anticapitalist attack against the nationalist putty that still holds this society together like nothing else, then the ‘Hamburg Riot’ was a step forward. Even though during militant actions a lot of sexist shit went down. What the reasons are for setting cars on fire and endangering bystanders remains unclear to us. This calls for a critique of these techniques. The mere escalation of the social conflict is not the proper goal for a radical left, because it ends in an idea of increasing conflict, and a politics satisfied with images of violence alone. Those who can’t imagine anything beyond the final collapse, or the ongoing brutalisation of the conflict, found their comfort-zone in the self-declared autonomous zone. At the end of the day, every riot is only as good as the societal organisation and it’s anchoring in everyday life. This was shown in Hamburg. But: the fact that the social conflict, when reaching the streets, did not follow the textbooks from political science, is even more relevant when – as in the Hamburger Schanzenviertel on a Friday night – political militancy becomes a social event. This means: If kids from the neighbourhood join in with activist from all over Europe to show the cops – who were continuously bullying them – that the tables might turn for a few hours, that the overequipped law-and-order state might lose some of its control then this not bad, it is good. Hope has always arisen from rebellion but never required any permission from above. We’ll gladly leave the question concerning how to prevent ‘such a thing’ from happening again to the bureaucrats on both sides of the barricades. For the puzzling part is not why people riot, but considering the everyday madness, why they don’t do it more often. Bottom Line: Despite some stupid actions, the Hamburg riot went to show that we can also hit the right ones.

Also, the media’s shedding of crocodile tears, a media that never misses an opportunity to attack the so-called ‘antisocial underprivileged’ are a joke. Only because it hit the bicycle of someone relying on welfare or a retired person’s car. Instead of handing out grades for the ‘correct protest’ the radical-left should ask itself who they wish to reach. Some good citizen or wannebe-cops who can’t wait to clean the streets from trash the rioters left, bathing in the journalists flash-lights. Or the 10,000 who clearly stated, in a variety of ways, they will not bow to the monopoly of force.

The fact that a few philistines in left-wing parties or NGOs compete to distance themselves from the riot should not disturb us. Refusing to understand that ‘criminal offences’ are the protest of the powerless, that is exactly what they’re paid for. Those who earn big money sitting in talkshows while other get beaten up unpaid for the cause, can’t expect respect. Even when talking about ‘social peace’ being abandoned, they will only move when we are strong enough to make them move. Same holds true for the ranting reaction of politicians, whom the riot shocked so badly. They resort to spitting out comparisons to National socialism and absurd accusations of terrorism. Nothing about this is harmless. It exemplifies a society’s turn to the right, when the image of burning car leads to collective hysteria but thousands of people dying at the borders does not cause a single frown. This discourse supports an internal rearmament, starting with deliberate false alarms by the police, calls for denunciations in the yellow press [tabloid media], and agitation against left-wing centers. It will not end there. Demands for legal amendments and special commissions are already on their way. We would be really surprised if the poor losers in the police and secret service are not going to exact revenge through a wave of repression and house searches. But the path into authoritarianism does not start with a riot, it just signifies how far off the middle class are from their own rules and fundamental rights. What’s certainly true: The turn to the right will not be pushed back by adapting to it.

To put it in a nutshell: Whether it is right to break the truce in the heart of the European crisis regime was never a question to us, not now and also not before the summit. The possibility was proven by the G20-protest. What’s even more clear now: Times are getting harder, the polarization is increasing. But as critics of this society we know: The only way out is through.