Check it out
You are here: Home / Events / Event on Transnational activism in Maastricht [NL]

As Beyond Europe we have been invited to participate at a grassroots festival in Maastricht in the Netherlands. You will find the program and all informations about “2.Dh5” under http://www.2dh5.nl/ . We are participating with an own workshop called “Transnational activism” scheduled on Saturday 20th February 16:00-17:30. 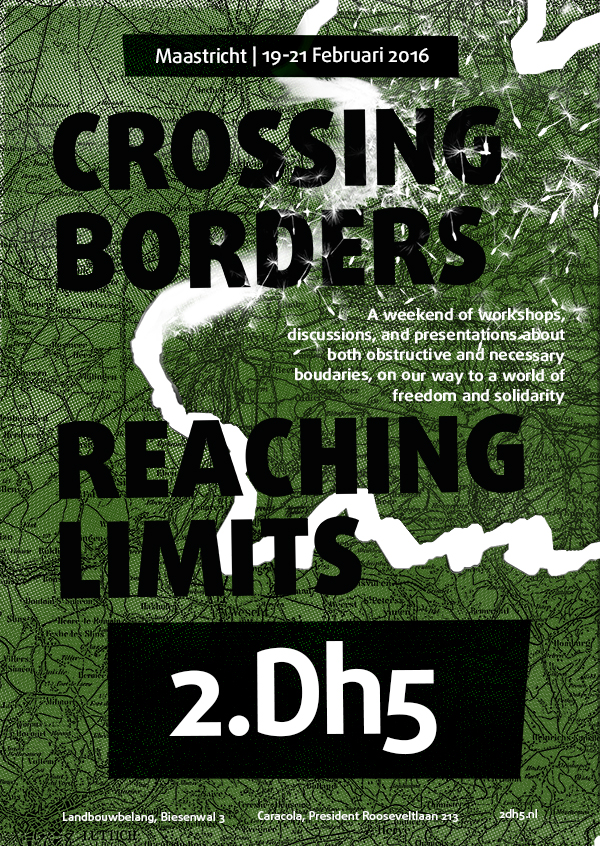 Ten years ago we started organizing such a festival because we thought it would be good to organize space for the exchange of information and knowledge about methods, tactics and strategies to achieve change. The name 2dh5 stems from a bold and mostly fatal chess move.

We like to move around with the festival and choose a new city every second year. This time, for the first time it will be held in Maastricht.

The festival is all DIY and low-budget, but we also try to ‘offer quality’. But we expect participants to help out and play an active role in the program. The festival starts on Friday Febuary 19th with a quiz and some cultural fun. On Saturday evening there will be a party, with also some serious elements. But workshops and presentations will continue at the main location on Sunday again.

Saturday, 20th February 2016 16:00 – 17:30
Caracola, President Rooseveltlaan 213, Maastricht
Antifa AK Cologne is part of Beyond Europe. This collective mobilises for transnational action against state and capital. Why do they work at the transnational level, and how do they relate to the local, and organise their activities?

This development we have to take into account when we are discussing strategics. the hopping to international tops is maybe an example of such: chasing leaders in an atempt to frustrate there conferences and the decissionmaking. recently there are different initiatives in Europe to organise people on an european scale against european goverment and more in particular the troika.

AK Cologne is guest on our festival and will speak about there experience with transnational organising with collectif beyond europe. they will tell us why they think it is important to organise on transnational scale, how to connect that struggle with local conflicts and how to organise transnational practically.