Check it out
You are here: Home / Exchange / On the Racist Attacks in Stockholm (January, 2016)

On the weekend of the 29-30th January a lynch mob roamed through the streets of Stockholm. A mob whose goal was to intimidate and beat dark-skinned young people gathered around the Central station and the central Sergel Square – places where Moroccan street children are frequently present. The black-clad mob would prove to consist of football hooligans from two of Stockholm’s hooligan firms, Djurgårdens Fina Grabbar (DFG, Nice Guys of Djurgården) and AIK’s Firman Boys (Firm Boys).

It is extremely rare that Swedish football firms unite across club borders. It is also extremely rare that firms take positions on political issues and participate in political manifestations. Yet it was exactly what happened this weekend. First was the Friday hunt for Moroccan street children, followed the next day by participation in the so called “People’s demonstration”, a demonstration organised by the followers and comment section of the hate-site Avpixlat. At the manifestation the hooligans and right-wing extremists from, amongst others, Nordic Youth placed themselves as a guarding block between Sweden Democrat sympathisers and the anti-racist counter-demonstration. A massive police operation prevented hooligans from attacking the anti-racists. When the media reported on the weekend’s events, the hooligans presence was described as a tail to the nationalist organisations. In fact, the situation was the opposite. The initiative for this weekend’s “hunt for street children and commies” was instead organised directly from the football firms.

When the sexual abuse on New Year’s Eve in Cologne became known, rightwing extremist websites began calling for the formation of vigilante committees that would patrol the streets in search of unaccompanied refugee children. The topic is of immense strategic importance to the extreme right movement. They have been spreading an image of an extensive media blackout of asylum seekers crime, that the police forces have lost control of the situation and that feminists are uninterested in raising the issue of migrants sexual abuses against women. In addition, the alarmism from politicians and editorialists about a “refugee crisis” that is threatening to become a “system collapse of the Welfare state” played right into the hands of extremists. In the flyer that was handed out for Friday’s patrols argued that “The judicial system has given a walkover and the social contract is thus broken.” Thus, a different kind of violent capital needs to come in. 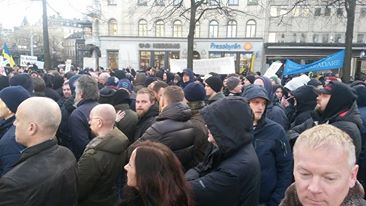 But it was not the right-wing organisations that acted first. Instead, it was the football firm DFG (The Fine Boys of Djurgården) that invited the other firms and proposed a joint street patrol in Stockholm. The firms of Hammarby and IFK Gothenburg abstained, but the Stockholm firm “Firman Boys” chose to accept the offer. The mobilisation took place within the network of hooligans and both sides agreed that the firms’ names could not be used. Nor would the far-right organisations be invited to the patrolling. Inviting them was a mistake the firms didn’t want to make again.

In May 2013 riots raged in Husby, a Stockholm suburb where many migrants live, and spread to the other suburbs in Sweden. In connection with this, the DFG made a similar attempt at a firm border mobilisation to patrol the streets. A closed Facebook group named “Swedens vigilantes” (Sveriges Medborgargarde) united and mobilised leading Nazis and hooligans together. For a few nights group members patrolled the suburbs of Stockholm to try to hunt down and attack rioters. The Nazi organisations, the Swedish Resistance Movement and the Party of the Swedes participated in their respective organisations’ names. Through their own media channels, they took control of the reporting and could thus control how the vigilante committees was presented and create the context in which the patrolling would be understood.

By creating Facebook groups, live updates, interviews and gathering its members from various parts of the country the Nazi groups created an ideological framework that football hooligans could not control. The firms responded by withdrawing from the co-operation. Now, when a similar situation occurred the firms sought to maintain control.

The inspiration to start street patrolling again also comes from the Finnish self-proclaimed Soldiers of Odin, who in a few months have spread from northern Finland to the other Nordic countries. Their ambition is to become a registered association and patrol openly with jackets and visible logos. They are now actively recruiting to start a Swedish subdivision. About 30 Djurgården supporters around the DFG showed an early interest, but the Soldiers of Odin condemned the weekend attacks in Stockholm and broke off contact with the football supporters. They are making a new attempt to start up Swedish street patrols in the coming weeks. 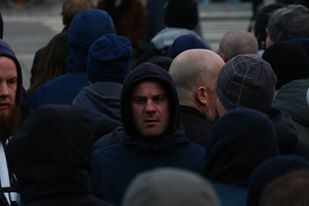 That the street patrols made their debut this weekend is directly linked to the People’s manifestation. It is one of the few occasions when the movement of rightwing alternative media goes out in the street, outside the anonymity of the net. The organisers are chroniclers of the largest hate-site Avpixlat and are also arranging ethnic separatist street kitchens for Swedish homeless people and last summer conducted a so-called “Pride” parade in the migrant suburbs. It is an untamed swarm of net activists that have evolved around the Sweden Democrats and hate-sites that is now trying to become a social movement in the streets. Outwardly the People’s Demonstration denied that the hooligans and the Nazi organisations were there, but inwardly they were welcomed for their protection and support.

The firms behind this weekend’s lynch mob and street patrols have explained that this was just the beginning. Towards the spring when the football season accelerates they promise to extend patrolling activities. Then they will also try to recruit more football firms to come and, through street terror, take the urban space into possession. When all team colours are mixed, there remains only a brown sludge.