Check it out
You are here: Home / ...ums Ganze! / #20J: Humanitarianism is not enough, fight Fortress Europe!

Whilst we are fully preparing for our camp in Chalkidiki in August we are not going to forget that #20J/#J20, the World Refugee Day, is approaching! We have translated a nice little teaser from our comrades from …ums Ganze’s TOP Berlin, where they explain their motivation to join the “we are the crisis block” in Berlin on this day. Humanitarianism is not enough, Beyond Europe everywhere, Fight Fortress Europe!

Whether neocolonial exploitation, the arms trade or the politics of impoverishment: the many reasons for escape are to be found here, just as the accumulated wealth and its fundamentals are based on those conditions. “We are here because you destroy our countries”. Neither generous donations, warm words or other humanist reflexes will be helpful against that.

Nonetheless,this is to do with the genuine tasks of the European Union: to protect transnational wealth and to create the conditions for capital accumulation within the context of state competition – between the individual nation states in the EU as well as between Europe and the rest of the world. Former duties of national states have been upscaled in order to improve the efficiency of these functions, such as securing borders and the control of migration – the separation of “valuable” from “useless” life.

A closer look at the situation of refugees proves that the “humaneness” of the European Union is an illusion, since it has to cover and legitimize the harsh security of its own interests: detention in camps (lagers), exclusion, institutional racism, police brutality, deportation, and thousands dead in the Mediterranean. The recent expressions of disgust and outrage concerning the daily tragedy in the Mediterranean may be real and comprehensible, yet first and foremost it serves as self-delusion and balsam for the soul: there is no humanitarian solution to a structural problem. The refugees who self-organised in Germany (and elsewhere) under catastrophic conditions to struggle against this situation made this clear as ever: “Every refugee is a political refugee”. As long as this Europe exists, it will remain Fortress Europe. The further military security of the sea-border of Europe is only a consequence of this reality. On the 20th June we will not hit the streets out of some kind of humanitarian reflex, but to attack the system behind the dead bodies in the Mediterranean: If Europe needs people drowning in the sea, then Europe shall drown itself. Fortress Europe is right at our doorstep – Beyond Europe begins here, too.

It’s not the Mediterranean but Europe that kills. That means for us: Beyond Europe everywhere. Join us in the streets on 20th June, in Berlin, London, Frankfurt and elsewhere. We are the crisis!
20th June – 1 pm– Berlin Oranienplatz 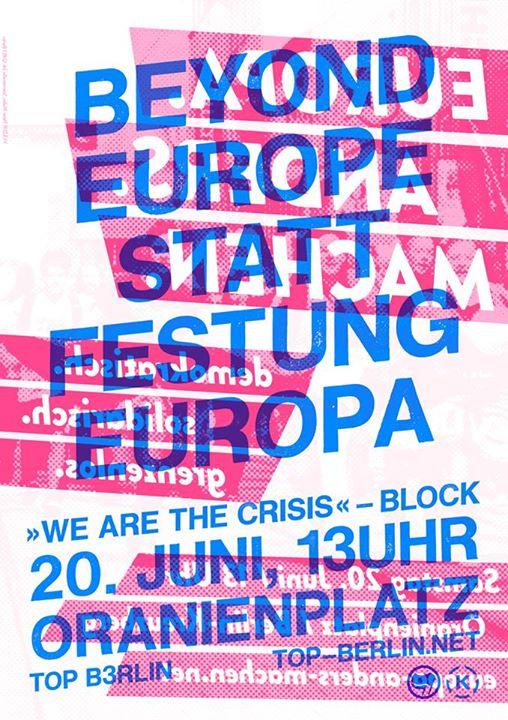