Check it out
You are here: Home / Exchange / Interview with Plan C (UK) on English Right Wing

Last week, the left German weekly newspaper “Jungle World” published an interview (http://jungle-world.com/artikel/2014/19/49836.html) with a member of Plan C about the current state of the English right wing. The interview stands in the context of the European Parliament Election, which will be held next week and where several right-wing parties are expected to gain a high number of the votes. Whilst other far right organisations in the UK are falling apart the United Kingdom Independence Party (UKIP) is on the rise and expected to win lots of European seats.

What is the current state of the far right and nationalist organisations in the UK?

The neo-fascist BNP are basically over: the past year has seen several splits from the organisation including 1 of their 2 Members of European Parliament (MEP), the collapse of their supporter base and leader Nick Griffin being declared bankrupt. In 2009 the BNP had 57 local electoral seats and Nick Griffin was invited onto Question Time(a popular British political discussion show): this month they look set to lose both of their seats in the European parliament and only have 2 local seats left.

After the series of large protests we witnessed in the aftermath of soldier Lee Rigby being murdered by Islamists in London a year ago the English Defence League (EDL) and its imitators are also declining into irrelevance. Their leader Tommy Robinson has left the organisation, claiming he was “unable to control extremist elements within it”, to work with Quilliam, a think tank with a focus on “counter-extremism”, only to be imprisoned for 18 months for mortgage fraud. He joins a list of other members of the EDL and related organisers who have been jailed for several incidents of politically motivated violence. Without these organisers or Robinson as a pole of attraction, the EDL are even more vulnerable to splits and infighting. Splinters groups from the EDL who either formed due to ego-clashes with Robinson or their desire to pursue more openly racist politics have attempted to replicate EDL’s success by mobilising against planned Mosques, Halal slaughter houses and so-called “Muslim” grooming gangs. Whilst the turn-out has been confined to a few dozen fascists a number of those that attended there regular demonstrations have been arrested for attempted arson, violent assaults and racism.  The current landscape of far right street movements can be characterised by a collection of small groupuscules unable to mobilise in large numbers and mainly focused on political infighting. The threat they pose is, whilst real, is that of local physical violence.

Whilst this is all positive the UK Independence Party (UKIP), a right populist party who campaign mainly on an anti-European platform, are going from strength to strength. They have performed well in local elections and some analysts predict they may well win the largest number of seats in the upcoming European elections. As well as winning seats they are pulling the Conservative Party to the right and, through large media coverage, helping to set a political agenda which manipulates peoples worries and plays to their strengths e.g. migration and the European Question. 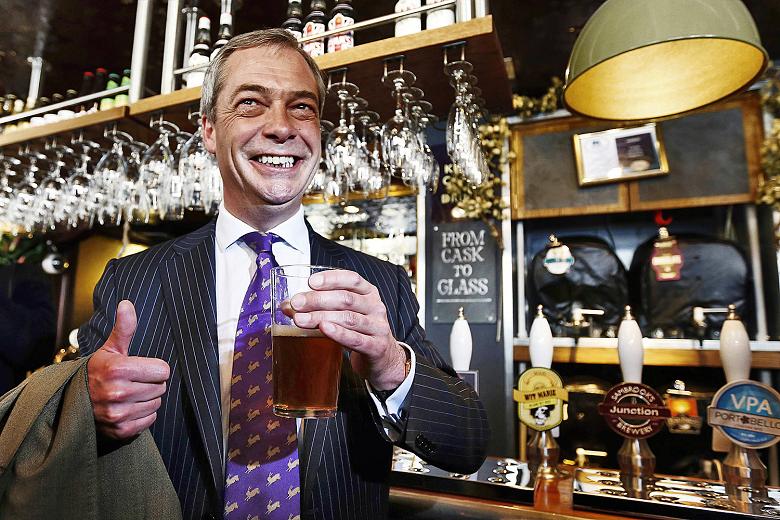 What is the key to UKIP’s current success?

There are several reasons behind UKIP’s current success. Whilst their actual policy proposals range from the non-existent to the ridiculous (in 2010 their manifesto included making the circle line in London actually circular – this policy has, unsurprisingly, now been disowned) they are still receiving lots of the votes. This is, in part, due to UKIP positioning themselves as the voice of the normal man in the street. After a string of corruption cases against British political elites (including MPs and high ranking police officers) and the ongoing lack of a viable political vision by any of the major parties voters are angry. We can talk of a crisis of representational politics in which, although its roots go back further than the current crisis, 2008 and austerity politics clearly have a role to play. One response to this has been to stop voting and indeed voting rates are on the decline. Otherwise, people are looking for alternatives or, especially in European elections, protest votes. UKIP, in classic populist fashion, are positioning themselves as the voice of the ordinary people in Britain and against the establishment elite.

UKIP’s success is not just based on the crisis of representational politics alone. They are part of a family of political organisations in Northern Europe which are predicated on the resentment of declining economic and political power. Their ‘solutions’, are a combination of a return to the nation (out of Europe, increased controls on migration) and neo-liberal policies. UKIP’s aim to “make Britain Great again” resonates with large numbers of voters concerned with Britain’s declining geo-political and economic role in the world and whose world view is strongly informed by the nation. UKIP are not a racist organisation, they have an active policy to expel anyone who has ever been a member of the BNP or National Front or any other fascist or racist organisation. Unlike the BNP, UKIP are an acceptable form of British nationalism (minus the explicit racism): whilst criticised by those left of centre they are not political pariahs. Although having a relatively small membership UKIP are well funded by a variety of former Conservative donors who have described the current coalition government as a form of “creeping Marxism”.

Ultimately, in the age of celebrity politics UKIP leader Nigel Farage is himself a huge factor in UKIPs success. He is a ‘charismatic’ leader (if you are into that sort of thing) who attempts to promote himself as a plain speaking man of the people. Highly staged photo-ops of him drinking and smoking outside pubs and sound-bites on the TV of him denouncing the major political parties resonate with people. Beyond Farage the party is actually composed, in the majority, of a variety of eccentric and/or unsavoury characters with little political appeal. It is a sign of the true crisis of representational politics that a small organisation like UKIP, which relies on marketing feelings rather than building movements or policies and a ‘charismatic’ leader can have such an impact on the political terrain. In some ways, the UKs disorientated left could learn some lessons and take some comfort from this.

What kind of resistance are they facing from civil society and the (radical) Left?

Whilst far right street movements have been opposed and, in part, defeated by the growth of the autonomous Anti-Fascist Network (AFN), which has replaced the increasingly ineffective front-group for the disgraced Socialist Worker Party – Unite Against Fascism. UAF have been shown to be increasingly effectual at fighting movements like the EDL after their capacity to mobilise started to crumble. This started when mosques in cities where the EDL mobilised effectively locked down muslim youths from going out onto the streets. As well as the issues which effect all front organisations, the UAF has been badly hit by the SWP’s cover-up of rape within the organisation. At the ‘March for England’ in Brighton on 27th April, a key date for many involved with street based far right activity, the mere 70 nationalists that turned up in the rain were massively outnumbered and successfully opposed by a broad coalition of anti-fascists, trade unionists and local residents with UAF only being a very small part of this. Effective counter-mobilisations and the reasons I mentioned above mean that far right street movements don’t appear to be as much of a threat as they have been.
Clearly, different tactics will be needed to oppose a nationalist populist party with legal recognition rather than a far right street movement composed of neo-fascists and football casuals. This task will be a difficult one. Currently opposition to UKIP is coming from the centre of civil society or through viral campaigns. It seems newspapers from across the political spectrum are revealing new scandals almost every week whilst UKIP election adverts are being vandalised and a campaign to send election materials back to their headquarters (at their cost) has gone viral. Farage’s trips to Scotland usually seem to end with him being chased by angry crowds. However, beyond the main political parties, who’s central critique of UKIP is that they are populists and unreasonable, there is limited collective political contestation.

As far as I’m aware the AFN is currently focused on counter-mobilisations for EDL-type organisations and the rest of the organised left is either involved in difficult processes of regroupment or focusing on other issues. Indeed, the European election, where UKIP are predicted to come first nationally, has seen little conscious discussion from the British left. Whilst it is not the responsibility of AFN to organise against UKIP alone I hope to see them start making moves in this direction in the near future.

UKIP is not a (neo-)fascist party. Is that a fortune or a problem for the Left?

UKIP fit within the mould of tradition cultural nationalists that appear ‘anti-establishment’ within the context of perceived cosmopolitan and pro-EU elites in the UK. They talk about the nation largely based on its relationship with the EU as opposed to a nationalist supremacy in itself. UKIP are clearly not a neo-fascist party but one can still encounter this lazy critique from those on the left. Likewise the EDL. The rise of UKIP presents tactical challenges, as mentioned above, but also those which are political in nature. In my opinion the left would benefit from developing an antinational critique. This lens would help the left come to terms with the contemporary radical right and right populist parties. Although UKIP pose tactical and political problems to the left, their resolution could help develop the kinds of antinational politics needed to analyse the current political situation. Plan C organised an Infotour for …ums Ganze! last month where the topic of antinationalism was received very positively. We hope to keep building on this moving forward particularly.

One of the topic’s that UKIP discuss a lot the EU which they criticise very strongly. Still, they are quite active in networking with fellow right populists, like AfD (De) and Front National (Fr). How serious do you think this European networking by the far right is?

Despite certain political disagreements the populist and far right are beginning to develop clear transnational relationships based on political affinities and also the politics of diaspora. Farage chairs the Europe of Freedom and Democracy group in the European parliament which also included groups like the True Finns. France’s Front National and the Dutch Freedom Party are also currently courting them to form a group which threatens to seriously disrupt the European Parliament. In January the leader of Jobbik spoke to supporters in London (a meeting which was strongly opposed by antifascists) and BNP organisers have reached out to Polish neo-fascists active in the South of England. Beyond parliaments the Swedish neo-fascists travelled to Ukraine for joint activity and exchange during the recent Maidan protests. We should be taking these initiatives seriously and building our organising abilities in our own countries and also across borders. Plan C are involved in Beyond Europe, a transnational process involving …ums Ganze! in Germany and Austria and 2 groups from Greece. We took part in last month’s European antifascist gathering in Athens and were encouraged by both the large numbers of participants and the representation of comrades from across Europe, particularly Eastern states where many of the larger far right organisations exist.

With thanks to AL