Check it out
You are here: Home / Action / Bluegreen bullshit!

Hundreds of police and pain grips, batons and pepper spray, night evacuations and denied paramedic missions: All the violence of the police is just being unleashed against the people who oppose further coal mining in Garzweiler. As a mockery on top of it, police calls for non-violence of the activists are heard.
As a monopolist of violence, the state would actually be primarily responsible for eliminating open violence and extortion as a means of regulating relationships and conditions in society. In Lützerath, however, the state uses this violence to regulate things itself, in the service of the particular interests of RWE. How does that work? Is it allowed to do that?
It may and should, according to its logic and its laws. In doing so, it defends property and acts in the service of the better success of capital accumulation. Both are essential tasks for this state. On the one hand, this state defines the conditions under which capitalist exploitation succeeds – precisely in the form of free exchange between legally equal owners. And it sees to it that the accumulation of capital in the space of the nation comes about in the best possible way, sometimes acting against the interests of the individual capitalists – in the case of Lützi, however, quite openly in accordance with the immediate interests of RWE. In this, however, the state does not simply take over a function of capital: it implements its own interest and puts its own violence at the disposal of capital: a violence that capital itself would not have. This violence is gladly used to bridge immediate crises: Here, it is a matter of alleviating the energy shortage by resorting to coal. 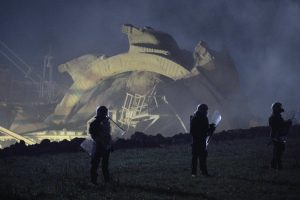 The provision of this violence is thus itself one of the functions of this state and thereby supplements and maintains the silent and diffuse violence of capital itself, which has always forced people into wage labor, divided the world racially and patriarchally, and acutely burns nature to the point of collapse. It is a “violence to the power of two”: the violence of the state works against every more serious movement of resistance against the violence of these conditions declares them to be illegal and intolerable violence.

And yes: Against this cynical, destructive and repressive violence a few stones are the least. We are ready to stand against this violence! But we are not ashamed to say that we are also afraid. We don’t like this harshness, we don’t want it, but it exists. Our resistance is first of all our coming together and our solidarity. We are forced to do everything else by external circumstances. For the abolition of fear!

Greens LOL. There is probably no need to discuss this at length. Below all level of criticism is who could not even keep up the farce of the “Green turn” for a few months and very quickly slipped into the bed of the coal companies. Only yesterday FFF-demos were the hot target audience, today they send truncheons and own RWE-police-collection-trucks against their activists*. WTF?!
And where they act according to their more contemporary vocation and appear as prophets of the Green New Deal, they become the object of criticism – and one of the most urgent. The Greens are the best and most reliable party of capital in its current phase. With the Green Turnaround (which, however, now has to wait for a short time because of the economic situation), they are striving for nothing other than competitive advantages for the German economy by initiating the restructuring of production that is necessary for the continuation of capital accumulation. The Green Turnaround is hardly sustainable – it relies on the most blatant environmental destruction in other regions, it requires long transport routes, it is inconceivable without excessive exploitation of racialized labor. But above all: it does not interrupt the uninterrupted compulsion to increase capital, which always falls back on nature.
In 1980, the Greens still knew that capitalism is “characterized by the increasing destruction of the basis of human life” and “that unlimited growth is not possible in a limited system” and that, in contrast, only “a society that is democratic, in which the relationships of people to each other and to nature are managed more consciously” (Call it by its name: Communism!).

Now, however, these words are only “ideology”, and the age of ideology is over: one has long since become politically capable, capable of governing and eventually capable of becoming chancellor. Besides, the Greens have become quite German in the process: With their moral claim, they demand of citizens anticipatory obedience, sacrifice and devotion to the good cause. True liberals at least recognize the individual’s striving for his or her own interest: the Greens demand devotion to a collective of “the good” – which, in the end, is only supposed to make Germany great again.
But hey, for all the hypocrisy that’s surely at play, it’s no wonder the Greens act the way they do. Basically, it has to be that way, since they are a political party in this state. 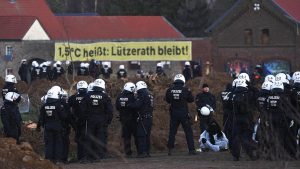 Caught up in the mirror game

But there is no need to be surprised about the Greens: Anything that starts out subversively cannot but end up supporting the system if it plays by the rules. No militant party-youth will help. But no new left-wing party would change much either.
In the end, the politics of the parties in the parliaments will always have to see to it that the accumulation of capital within the nation succeeds well: if only to be able to implement the election promises typical of one’s own faction, however progressive they may seem. The diversity of opposing positions itself becomes a mirror game from which the same picture must always emerge: Value creation, succeed! If need be, even the party that has “green” in its name and is anti-capitalist and anti-authoritarian will suddenly send in violent cops to clear the way for the coal excavators. And this, while the climate crisis can no longer be ignored and they themselves – admittedly with the deceptive package of the “Green Turnaround” – had started in front of their voters to promote the exit from fossil energies.

But the political scientist Agnoli knew it: The building of “responsible politics” has an entrance and no exit: “Only in the responsible, not merely minded entrance into the palace do they show their “capacity for politics”. If a group acts responsibly, it puts aside everything subversive, cooperates in the construction and expansion and thus achieves full acceptance: It first becomes capable of opposition; then capable of coalition: finally capable of governing: a fixed component of power, which drives the formerly unruly into the palace and brings it back into the norms, rules of the game, enclosures. In other words, it becomes a systemic function just as its representatives are transformed into functionaries of representation” (Johannes Agnoli).
Please note: If we criticize parliamentarism here, it is not because it is too open-ended for us, and we, on the other hand, think that we know the only good thing. On the contrary, parliamentarism in the state of capital is – despite all real and partly relevant differences among parties, despite all advantages over forms of rule – too predetermined. What is essential and urgent – the question of in what way, with what goals and at what cost production takes place and how wealth is distributed – is not up for discussion. But this means that the space in which the solution at the root of the more relevant problems of the present could be addressed is never reached within the framework of bourgeois democracy. So when we criticize parliamentarism, it is not because we have in mind an organic, collectivist society in which everything is predetermined, even in the best way. We criticize parliamentarism because what has to come out on the whole is fixed, because real solutions cannot be sought and argued about together, consciously and self-determinedly, in a plurality of opinions and positions. That in turn – and nothing else that has ever been called that – would be communism.

But yes: In the case of Lützi, it would be crystal clear and there would be no question that coal mining must be stopped immediately. Coal energy is not reasonable and not an option. But in this political system it is – times and again the option of choice.