Check it out
You are here: Home / Featured / Solidarity with the protests in Iran

We did not revolt to return.
Freedom is neither Western nor Eastern, freedom is international.
Freedom of society is not possible without the freedom of women!

Historic things are underway in Iran. Protests against the regime of the “Islamic Republic” have occurred again and again. Again and again they were suppressed with violence.
Now things seem to be different. The protests are continuing. More and more people dare to openly question the power of the mullahs and their henchmen. Central symbols of the regime are being attacked: The forced veil is broken, the control system of the morality police is questioned, the pictures of the leaders are destroyed and burned. The demands are also abundantly clear: It is about the end of the mullahs’ “Islamic Republic,” not about some minor improvements.

It is a revolution – hopefully a victorious one! 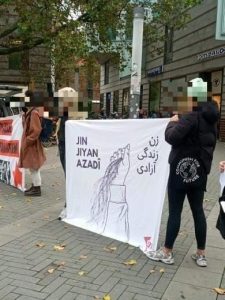 It is a revolution whose core and initial spark is feminist. A system that has oppressed an entire population for more than 40 years and has never seriously faltered despite articulated opposition in the underground and abroad now stands a good chance of falling, because women have fought back – after the state femicide of Kurdish woman Jina Amini.
Patriarchy has consequences all over the world. In Iran, however, patriarchal oppression connects to the Islamist system of rule in a specific way. Gender inequality is a main pillar of the regime: for example, the forced veil or forced hijab was a symbol of the 1979 “Islamic Revolution” and is used in everyday life to control women’s lives and bodies. The forced hijab consolidates gender binarity, defines the role of women and the image of family, and solidifies a clear gender hierarchy. Women are treated as a danger that could destabilize society. The women who took to the streets against forced veiling on March 8, 1979, were aware of this. Their slogan: “We did not revolt to return. Freedom is neither Western nor Eastern, freedom is international. The freedom of society is not possible without the freedom of women!”
The rebellion against the forced hijab is therefore on the one hand a rebellion against patriarchal oppression, against religious fundamentalist Islamic oppression, but on the other hand also against the ruling system of the Iranian regime as such. That is why the persecution is currently hitting women in particular. This is why the call of this revolution, which is valid for all, is: “Woman, life, freedom”!

By the way – it is remarkable that not only in Iran, where misogynistic violence and oppression are state policy – but also in many places where an anti-feminist rollback is taking place (like in Poland and the USA, in Italy, but also in the anti-war movement in Russia), it is women and feminists who are leading the protests. It is the global feminist movements that are shaking up the status quo and igniting the longing for a different, a liberated society.

This revolution is about fundamental things: Self-determination, freedom, rights, democratic political forms, legality. It is about the end of a fascist-religious rule. Historically this cannot be taken for granted!
Considering the importance of what is happening in Iran, it is more than astonishing how little organized forms of solidarity have taken place:
To declare the situation in Iran as meaningless for the “revolutionary struggle” or the like – or even to mark it as “Western” – and therefore to shortchange solidarity is unfortunately as wrong as it is widespread.
In this context, we also want to express a self-criticism here as a left-wing group: As leftists, we must constantly remind ourselves – as we have just heard – that freedom and rights are neither Western nor Eastern, but universal. And they are universal to be fought for and made concrete. Those who fight for a liberated society want precisely the radical realization of this freedom.
At the same time, one can see quite clearly how little serious “the free West” and the EU are about the human rights to which they like to refer. How little serious the self-proclaimed “feminist foreign policy” is about women and queers. The only consequence so far is the ban on the activities of the morality police. The regime’s violence is reduced to that of an executive apparatus. In concrete terms, this means that sanctions have been imposed on 11 people (by the German government)! Meanwhile, trade with Iran continues and people are deported to Iran.
If these protests are also suppressed, it will also have to do with the constant pacting of other countries with the Iranian regime.

Iranians* meanwhile demand crystal clear: The closing of embassies; the closing of Iranian bases in Germany, like the IZH in Hamburg; the consequent action against Iranian agents. The end of trade relations with the mullahs.
WE JOIN THESE DEMANDS IN SOLIDARITY!

Ultimately, it is about the end of the regime – not about demands. Because it is clear: The end of the Iranian regime would be a liberation for so many. This has to do with the specific form of rule of the “Islamic Republic,” which is not “just” an authoritarian dictatorship.
The Islamic Republic organizes society through a complicated system of institutionalized gangs and rackets that share power and resources and, in some cases, compete with each other. Prominent among these are the Revolutionary Guards (“Pasdaran”), the elite military unit that controls the nuclear program but also plays an important role in the economy, especially influencing foreign trade.
This also means that there is no general law that is guaranteed by one of these actors. One must either be assigned to and subordinate to one of the apparatuses-or be exposed to their arbitrariness. Officially, there can be no civil society and no free public. This is another reason why protests, in which people fight for a new presence for themselves in public space, are so important.
The unity of the competing apparatuses is preserved by a division of spheres of influence and boosted by an imperial regional policy. The latter makes the mullahs’ Iran the central destabilizing factor of the Middle East: whether in Iraq, Syria or Lebanon, in Yemen or in the Palestinian territories, Iran is getting involved.
Ideologically, this unity is generated in a mystical notion of a higher, spiritual community and an end-time mission of Iran. One of the central means of realizing this unity is state-imposed anti-Semitism, imposed as a struggle against the community-disintegrating and harmony-disrupting forces identified in the state of Israel. This is also why many of the protesters now oppose the regime’s aggresive anti-Israel policies and its claims to hegemony in the Middle East.

It is terrific that the protests have reached different sectors of Iranian society. In short: It’s all or nothing!
The first protests unfolded starting from the Kurdish cities: Because the Iranian regime oppresses minorities – especially the progressive Kurds. Now not only Kurds are shouting: “Kurdistan, eye and light of Iran”.
Other minorities, such as Arabs and Baluch, are also being severely oppressed and are fighting back.
Strikes and protests are taking place by workers: It is also a class issue!
The protests have reached the universities and schools and have set students, lecturers, pupils and teachers in motion. Especially the protests at the universities are very significant – and experience the most blatant repression. It is a question of freedom for self-education, of liberation from propaganda and ideology.

What is certain is that the mullahs’ regime must go! What will come, we do not know. The people in Iran, the women, the Kurds and all minorities, the young generations: They should be able to make their history. We hope that progressive forces will prevail. We know that even for a little bit more freedom, a little less fear, it will have been worthwhile to fight and to raise our heads.
We admire the strength of the friends in Iran! We mourn for each who lost her life in this fight, we stand at the side of those who had to suffer imprisonment, torture, rape. And we thank the women in Iran, who are the heart of this revolution.
Jin, Jiyan, Azadî!