Check it out
You are here: Home / Action / Communize Care! Hospital strikes in Western Germany 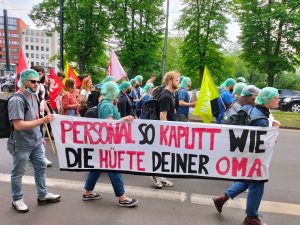 Staff as broken as your grandma’s hip

Since the beginning of the pandemic, there have been countless reports of hospitals operating under extreme pressure, staff being burned-out, and quitting in droves. While Germany has a relatively high number of beds compared to other European countries, this number alone belies the rotten foundation of its care industry: Smaller hospitals are being closed in favor of large centralized units, pay has stagnated and not kept up with inflation, and apprenticeship has been reduced in favor of outsourcing training to poorer countries and snatching up those workers with higher wages. In addition to all of these factors, the past two decades have introduced market mechanisms into hospitals, where treatments are categorized at specific prices encouraging some treatments (c-sections, knee operations) above long-term care and prevention. Patients and front-line care workers have been paying the price of these neoliberal reforms. The patient to carer ratio has been steadily falling and the time nurses have for each patient is decreasing as workers are overworked and spend their time filling out idiotic bureaucratic forms – so much for neoliberalism’s promise of doing away with that – instead of taking care of patients.
While the pandemic has created some brief moments of public solidarity with care workers, clapping doesn’t pay the rent and despite some lame attempts by former health minister Jens Spahn, to take out some market measures, the situation has steadily declined.
In spring 2022 the service workers union Verdi has finally been moved to action and following some unsuccessful attempts to reason with the state, workers at eight university-run hospitals in Germany’s largest state are on strike. 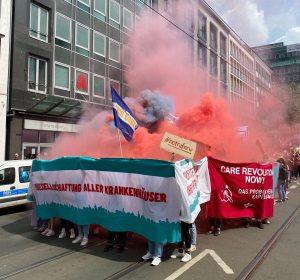 In the past Verdi has not exactly been known for its militancy: contracts won by the union barely keep up with inflation and strike action is avoided in favor of early negotiation with bosses. The union has generally ignored the growing unrest in precarious labor and has been at best ambivalent if not downright hostile to organizing gig workers. The union drive at the university hospitals has been more grounds up: There was a survey of workers, asking for their demands and they elected their own negotiators, a level of democracy unusual for the calcified German union bureaucracy. Alas, this doesn’t make a grassroots union yet, and as negotiations drag on we will see how elected workers deal with pressure from the union hierarchy to deliver results.
At the same time, the workers’ demands have great potential to allow solidarity from the population. Everyone knows someone who has been sick or could end up in hospital. The demand for more care workers to ensure better patient treatment has the potential to garner wide public support, despite the press already attempting to frame the strike as endangering patients.

Our role in this?

Baby steps towards more democratic unions, a drive against market forces in health care, and demands that have the potential to be taken up by the entire population are already great conditions for left alternatives. In addition, workers themselves are fed up with capitalism ruining what should be a labor of care. Slogans such as “Capitalism out of the clinics!” are commonly heard in their demonstrations and at the strike posts, workshops are being held on alternatives to capitalist health care, analysis of the market forces destroying our hospitals, and feminist utopias.
These are great developments and as radicals, it is our responsibility to fuel the fire and ensure, that if you want something to be organized around care, you can never leave it to the market. To drive this point home, radicals must seize the opportunity to agitate around an alternative to capitalist health care and use this as a focal point from which the exploitative nature of this society becomes visible. We also have practical skills to offer, when it comes to organizing demonstrations, communicating with the press, and so on.
For the notoriously subcultural radical left in Germany, the strikes are also a chance to learn from workers and get a first-hand account of the “crisis of reproduction” as it unfolds while workers are taking care of patients, preparing meals, and scrubbing floors. 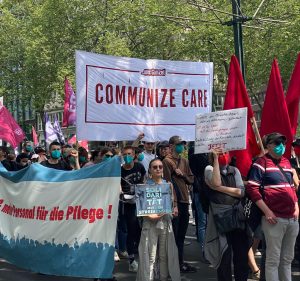 The crisis around care can’t be resolved by capitalism, what we want is the communization of care: A society in which reproduction is organized democratically, with patients, carers, and kin (family and others) in control and not bureaucrats and capitalists.