Check it out
You are here: Home / Europe / Fight the authoritarian turn: No more police laws. 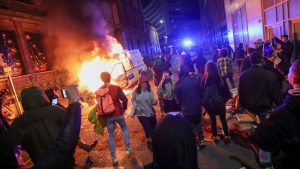 Despite some valiant struggles, the Police Crackdown bill passed in the UK a few weeks ago. It’s not only a frontal attack on the right to protest, but also includes racist restrictions on Gypsy, Roma, and Traveller communities. The law is not an English aberration, but part of a pattern of laws passed or in the works across Europe.

France went first with a law that barely veiled its islamophobic contents with a call to French republicanism, whose colonial nature couldn’t be more obvious. On top of this the new loi securite general is every cop’s wet dream: further militarization of equipment, “privacy” protections for cops to avoid scrutiny, more severe penal codes, and a vast increase in surveillance.
Meanwhile, the Mitsotakis government in Greece is doing its best to undo decades of anti-authoritarian struggles, by destroying some holy cows of the movement, such as allowing cops on campus and creating bureaucratic hurdles for demonstrations.
A similar restructuring has been taking place in Germany, where due to the federal nature of the state, these attacks have been very different depending on the region. While some states went the path of relatively liberal reforms, such as Berlin and Schleswig-Holstein. Others, such as Bavaria and Northrhine-Westphalia (NRW), have been militarizing their police forces and clamping down on protests. As an active participant in the protest against a new “Versammlungsgesetz” (“assembly law”) in NRW, we have been pushing back against this latest attack.

Death by a thousand bureaucratic cuts

This isn’t the first attack on the freedom of assembly in NRW however. 2018 saw the introduction of a new police law, which, among other things, gave tasers to the police, allowed cops to spy on our phones and computers, added more CCTV surveillance, and significantly increased the time one can be held without a trial. It notably also added further legroom for racial profiling, a practice that is rampant in this country, as even the UN has noticed.
The massive protests against this couldn’t prevent the law and the protest alliance quickly devolved into the internal squabbles the German left excels at. Still, the government seems to have learned more lessons from the process than we did: The new Versammlungsgesetz is focused solely on the (radical) left and its most prominent movements: Antifa and Climate Justice. Which makes it a lot easier to push it through parliament, without any concerned liberals losing too much sleep over it. The law contains all kinds of nasty stuff: Criminal penalties for disrupting fascist protests, outlawing displays of militancy through similar clothing (e.g. Black bloc or the white vests worn by Ende Gelände), and less oversight for undercover cops. Aside from this headline-grabbing stuff, the already farcical situation of having to register a demonstration in Germany is becoming even more bureaucratic: It can’t be done via phone and only on weekdays. The right to assembly – supposedly guaranteed in the constitution – is becoming more of a joke than it already was. The coalition government in NRW claims to primarily be targeting fascists by making sure they can’t intimidate the public with their demonstrations. A ridiculous lie: Most examples in the accompanying commentary of the law come from the climate and the Antifa movement. It is the latter that is holding back the fascist threat and not the cops who are at best enabling it and at worst are in cahoots with Neonazis.

“Damn it, Hans, we beat up the wrong guy”

Normally this whole charade would have gone its usual course: We would have protested honorably, the media would ignore us and the government would push its authoritarian fantasy through parliament. If we were lucky maybe the Greens or the Social Democrats would discover their backbone (elections are coming up after all) and fight to make some cosmetic changes. 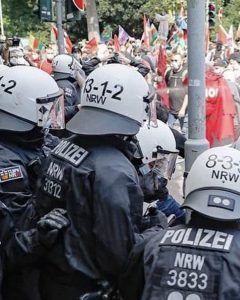 Unfortunately for the state government, the largest demonstration against the law so far (~8000) in Düsseldorf a month ago was overshadowed by massive police repression. People were kettled for 9 hours in the blasting heat and for some time weren’t able to go to the toilet and were denied access to water. This usually wouldn’t interest anyone in the media, but this time the cops beat up the wrong guy. As the police were attacking and beating protestors, a DPA journalist was caught in the melee and beaten by the pigs, even as he told them he was a member of the media. This caused some outrage and the state government has announced it will reevaluate the law. Meanwhile, the minor coalition partner of the Christian Democrats suddenly noticed, that the law they were previously more than happy to pass, might infringe on people’s rights!

They still can’t hold us back 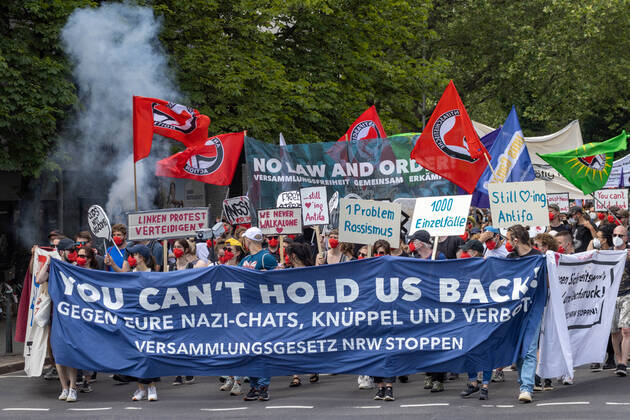 So where does the radical left figure in all of this? While we don’t care about liberal platitudes at the same time this law would significantly reduce our maneuvering space. To have a realistic chance of defeating it we will have to hold our nose and enter coalitions with people, who, in other circumstances, have no issue with talking about outlawing Antifa or destroying the environment. Still, our chances for defeating this law are better than they ever were, thanks to the blatant stupidity of the cops. We have to seize the momentum and launch a dual attack:

1) Do everything we can to build a broad coalition to defeat this law.
2) Ruthlessly criticize the law and order policies of “the great moving right show”, theoretically and in the streets.
Social democrats, Greens, and other libs might be on our side for now, but elections are coming up and the push to law and order politics is beyond party politics. It can only be defeated by a broad social movement, which won’t be held back by their laws and whatever shit they cook up next.