Check it out
You are here: Home / Featured / The show must go on – Gminder and Mitarakis on their visit in Moria 2

Notis Mitarakis, the Greek Minister of Migration and Beate Gminder, Head of the European Taskforce for Lesbos and acting head of the EU task force on Lesbos visited Moria 21 on the island of Lesbos end of November.

by dunya collective from Lesbos (Greece)

It had the looks of a well-rehearsed show. Business as usual: In his speech Mitarakis emphasized that the camp was clean, save and orderly. He spoke of a “structure that has no traces of the chaos of Moria” and declared that flood protection measures had been completed and the camp was adequately prepared for winter. The camp could now function independently from the health care system of the city of Mytilini. 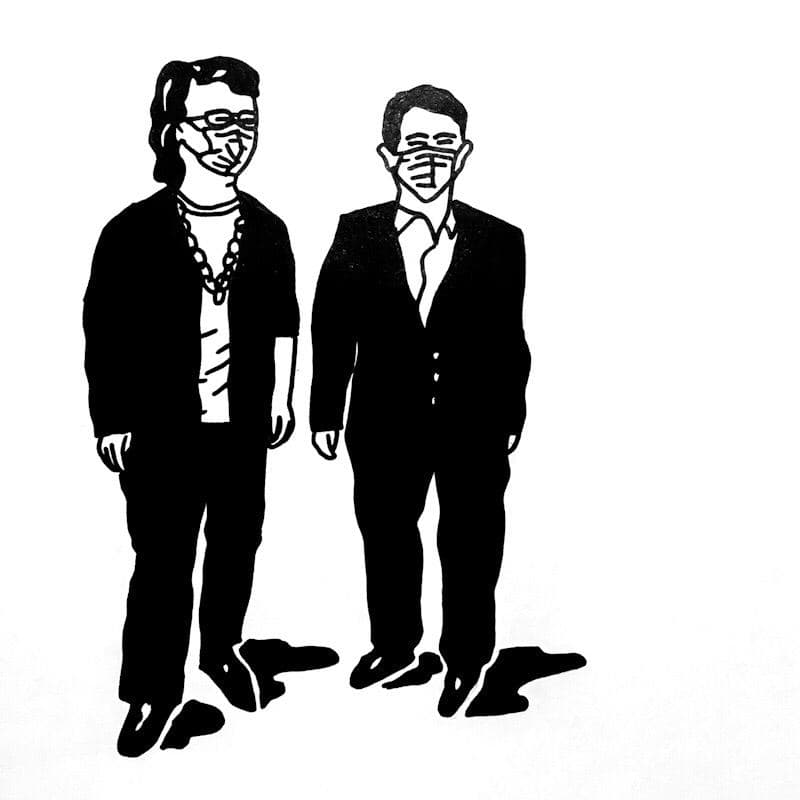 The minister continued by explaining that together with IGME1 the soil had been analyzed – a detail that could be of importance, since the camp is located on a former shooting range which makes contamination with lead and other heavy metals likely. With this step he reacted to the concerns of NGOs and media reports.2 EU commissioner of home affairs, Ylva Johansson, had stated after the fires in Moria in early September that conditions were indeed inacceptable. “Conditions in Moria, both before and after the fire, were unacceptable. Men, women and children living in overcrowded camps with poor sanitation and little access to health care.”3 Trusting Mitarakis’ comments, it looks like we are not about to recreate the same conditions. But the perspective of the people who must live in the camp is very different. It was not without reason that they quickly named the new camp Moria 2. A short overview:

I There are very few showers that only run with cold water, so-called bucket showers. Camp inhabitants have to improvise and build their own showers to wash themselves. There is neither running nor hot water. People have no other option than doing their laundry and washing themselves in the ocean.

II The quality of food is as bad as it was in the old camp Moria, the same catering company “Elaitis” brings the food. Food equaling three meals is distributed once a day. The food is of very low quality and in the evening it is often times spoiled already.

III Health care is insufficient. Many of the inhabitants do not trust the doctors anymore. There are long waiting hours and inhabitants often only receive paracetamol as a treatment. There is hardly any psychological care. There is an epidemic of scabies that was already a big problem in Moria 1.

IV The location of the camp is exposed to the north. The tents are thin. Wind and weather pull at them and cause enormous noise. Many inhabitants complain about sleep deprivation because of this. It is also cold at night and the tents are not heated. The use of radiators is officially forbidden, as is open fire.

V Electrical installations are insufficient and in many cases seem improvised. There has already been a fire in Moria 2, apparently caused by an electrical short. Inhabitants extinguished the fire, not the fire brigade.

VI There is very restricted access for the press. Journalists can only enter the camp with special permission and accompanied by police or camp personnel. These permissions are hard to come by. Of course, protection against COVID-19 is important, but these measures were already in place before lockdown. They aim at avoiding images of the ugly truth of the camp reaching the public.

VII Inhabitants often describe the camp as a prison. At the entrance there are metal detectors. Drones surveil the camp and there are 300 police officers on duty, working in shifts. On top of that, the possibilities of leaving the camps are heavily restricted. Lockdown has impacted the camp tremendously and now inhabitants can only leave the camp once per week for four hours maximum. This results in enormous psychological pressure. 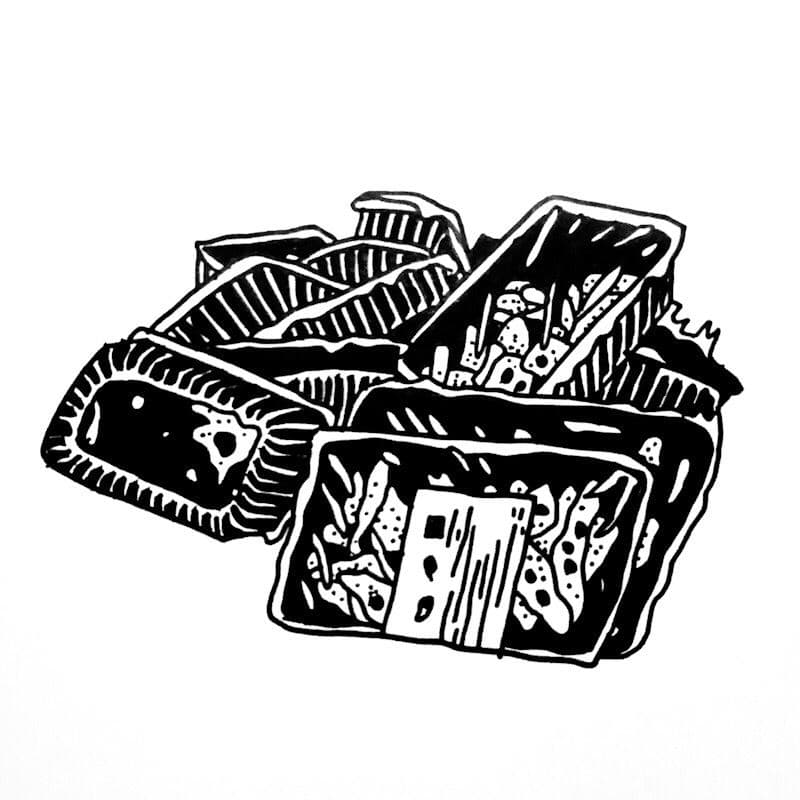 Many do not now what is next to come. The repeating questions we encounter are: Will they decline my asylum application? Will there be a transfer to the mainland? Will I receive asylum? Will I be homeless? Will Germany take me in? What have we done to deserve this treatment? What will happen to me if I stay here? Will there be a new camp? Will I be allowed into the new camp? Will the camp be closed? How long do I have to stay here?

What do we know about the construction of a new camp that the EU task force is involved in? After his tour of the camp, Mitarakis underlined that Moria 2 was only temporary and together with the EU commission, a new, closed camp was in the works. “In the following month we will quickly work towards the creation of a more permanent, closed, controlled structure, in cooperation with the European Commission”, Mitarakis stated.4

Mitarakis has made similar statements before to online portal “Infomigrants”: “These camps will have double fencing, they will have a secure gate. Asylum seekers will be allowed to exit and enter using a card and a fingerprint at a dedicated time through the day. Camps will be closed at night – it’s a policy we are already implementing in the temporary camp in Lesbos. And also the camp will have a fully closed ‘pre-removal section’ for the people that have had final decisions and need to be returned to their countries of origin.”5

Doesn’t this contradict the statements of EU Interior Commissioner Ylva Johansson? She always stressed that a new building would be an open multi-purpose camp.6 But she also spoke of controlled entries and exits. Maybe Mitarakis is just not shy about speaking openly about his ministry’s plans. He simply does not see the necessity of being reserved when it comes to this issue. After all, the construction of such a prison camp is fully in line with the political agenda of the ruling Nea Dimokratia party. The ultra-conservative Greek government wants to show strength and score points with the extreme-right voters. It already did so with the eviction of the PIKPA on Lesbos.7 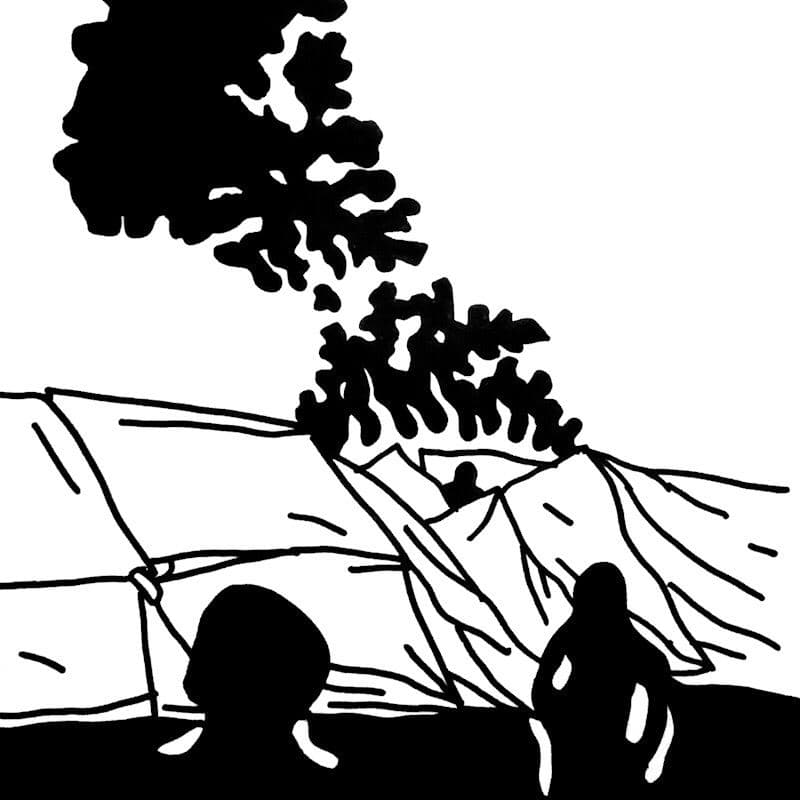 It looks as if the question of the construction date and exact location of the new camp is about to be resolved. All of the sites proposed until now are far away from the city or villages. Apart from the fact that housing people in camps for any length of time is inhumane, a camp in the middle of nowhere and without proper connections to public life has close resemblance to a prison. Social exclusion via spatial segregation is a popular tactic in European-Greek asylum policy. The question now is whether there are two different versions of one and the same camp in play, or whether Johansson deliberately used nicer words when speaking to the media to distort reality and calm public opinion.

Mitarakis talked big in September, announcing that the new camp will be completed before Easter of 2021. These plans can already be considered failed. There have been differences to be settled in regard to the location, which stalled the process and required new negotiations. “It is not easy to speak with the local population”, Gminder said to the press.8

This is why the visit to Moria 2 was only a small item on the agenda of the two politicians. The actual reason for the visit to the island of Lesbos must have been the agreement on the building site for a new camp. The two politicians met with officials of the European Commission as well as the Greek Ministry of Migration and technical advisors in Mytilini to discuss the project. The proposed location, directly next to a waste dump in Vastria, has already been rejected by the EU.9It would only damage the tarnished reputation of the Nobel Peace Prize winner further. The site proposed by the mayor of Mytilinis, Stratis Kytelis, and Charalambo Athanasiou, the representative of Nea Dimokratia of the respective prefecture, was the last one still on the table. After the meeting it was announced that this is the location they had now agreed upon. It is a private property called “Eleftherakou estate”, located about two kilometers to the east, near the landfill. The owner will cash € 70,000 of rent per month. The property belongs to the administrative district of the island capital of Mytilini.10Gminder and Mitarakis were confident that construction will start before Easter 2021 and the camp will be completed in autumn of the same year.11

We now know that a new camp will be built close to a landfill in the middle of nowhere. We do not know how open or closed the camp will be. But its location alone makes it a prison. It has also become clear that the current camp is a rather long-term “temporary structure”. Refugees will have to live there for another full year. This is an enormous psychological and physical burden for them. Europe has the responsibility of fairly allocating the people needing asylum. Particularly rich countries such as Germany are in a position to do so, but they obstruct this process politically. The new camp and the new EU migration package show what the phrase “No more Morias” actually means: The show must go on. 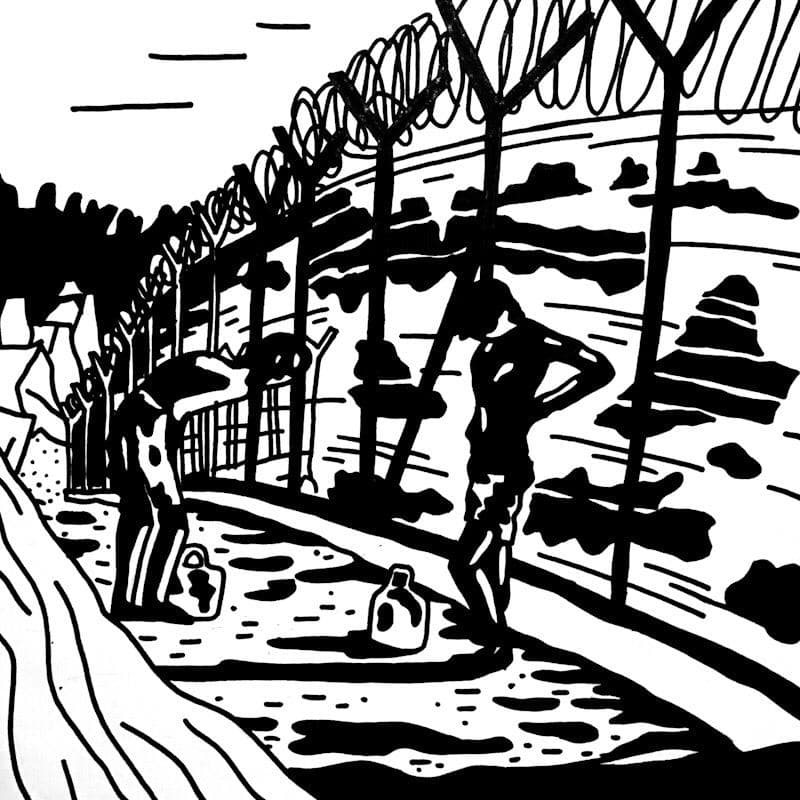 6 Ylva Johansson in a conversation with German ARD, at 13:12min https://www.youtube.com/watch?v=eHVi99NdLME

7 PIKPA was a unique project offering shelter to particularly vulnerable refugees, without violence, police or fences. It was operation under the principle of “community organizing”. In the early hours of October 30th the project was evicted against the will of its inhabitants who were transported to Karatepe 1 camp. This camp is to be closed at the end of December. The refugees do not know what will happen afterwards.