Check it out
You are here: Home / Europe / GLOBAL SECURITY LAW – POLICE WITHOUT CONTROL, POPULATION UNDER CONTROL

The is a translation with some modifications of a text by Cerveaux Non Disponibles.

The ban on broadcasting police actions centralizes all fears, but legalizing drones and surveillance technology is just as damaging to freedoms and democracy.

It is a subject that is little discussed and yet concerns us all. The text provides in these gaps to legalize facial recognition in the public space and the real-time exploitation of information about people. The video stream would be processed live by the police command, as mentioned in Article 22. The text does not mention the term “facial recognition”, but it should be noted that all amendments aimed at clarifying the practice were rejected. An example is amendment n°CL340 which explicitly provided for the prohibition of facial recognition. Rejected! The spirit of this law is to put the entire public space (especially cities) under permanent control. Without blind spots, with all the technology of algorithms and their freedom killing uses in data collection on a daily basis.

The State has lost the battle on police violence since the yellow vests, especially through the profusion of images made available to all on social networks, which have become a true self-media for any individual or collective that finally finds a voice.
The purpose of this law, which provides for 1 year of imprisonment and a 45,000€ fine for broadcasting that “undermines the police” is to limit freedom of expression in order to regain control of a republican narrative that has been completely eroded. In order to regain a hegemonic discourse, the hundreds of arbitrary acts of violence, daily racism, almost permanent impunity, as well as the dirty work that the police carry out on behalf of the State have become realities that must be hidden at all costs.

Today, the forces of law and order already regularly intimidate professional journalists or simple witnesses who film. The police are already exercising a judgmental practice in the field through the physical and psychological violence they exercise. Imagine their zeal if this law were to be passed… If the National Assembly gave even more power to those who already abuse it with impunity…

The manifestation of truth, a theme so dear to justice, is taking a hit 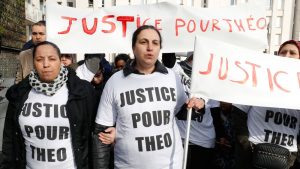 Without an image, how many crimes and violence would have been hushed up or would not even have reached the gates of a court? Judges themselves say it: images are useful and without them, the police version always wins.

Let’s remember the importance that images have had for several cases:

Blurring of the Mouth

This law also poses a major technical problem. Implicitly, it would sign the end of live videos showing police officers. If in their great leniency of falsely naïve playmobils the LREM (Macron’s party) deputies have suggested blurring the faces of police officers, let us recall that it is currently impossible to blur faces in real time. And that, in general, blurring a face on video is a complicated technique that is not within everyone’s reach and that would in fact restrict many images. If, however, this abject law were to be respected…

Last but not least, it should be noted that the police are not worried by the diffusion of their faces, which they have already been in the habit of masking for a long time (as well as not wearing their numbers), and although we have seen barbaric acts committed by them, this has not been the subject of popular reprisals to date. The argument of police protection is not based on anything and is mainly a bluster that makes the oppressors look like the oppressed.

Other aspects of the law should be addressed, such as the extension of the carrying of weapons in public places, even when not in use, or the increased role of private companies in policing.

The journalist Nnoman (his video) is being beaten by police.

What is striking in this text, which was passed on November 17 in the National Assembly, 2 years to the day after the yellow vests began, is its martial aspect. Do we realize that in the same law there is a state response to social protest and one against terrorism? This law intends to globally manage these problems in the same way. The repressive outcome of the November 17 demonstration is particularly strong, especially for the press.
The terrible image of a system that only responds with violence and intimidation… including on totally harmless demonstrators.
But the thousands of people present around the National Assembly could feel the anger rising and that no water cannon will be able to extinguish.
“The last warning for journalists: leave the premises with your press card or you will be arrested.” Quietly, the police muzzle the press covering a press freedom rally… All this knowing that they are being filmed. The law has not even passed and France is already in a totalitarian country. And it’s hard to see how the trend could be reversed. Neither petitions, nor demonstrations, nor the UN will be able to stop the fascinating drift.
At least 7 journalists have been arrested, threatened and/or beaten. Journalists who were covering a rally for freedom of the press and demonstration. It is extremely serious what this government allows itself! In particular, photographer Hannah Nelson was arrested last night and spent the night in police custody.