Check it out
You are here: Home / Featured / It’s all a matter of attitude

2020 has hit us hard. At the beginning of the year the world was not in order, but hardly anybody expected a worldwide pandemic and in the consequence an economic-political crisis. There can be no “back to normality”. How could there be? Fast-moving capitalism is constantly reinventing itself, even or especially during the pandemic. At a very high price: the profound splits at the national and global level have come to an extreme. Where before there was a gap, now there seems to be an unbridgeable hole.

These phenomena become particularly clear in two examples, which are briefly summarized below. On September 9, the overcrowded camp for refugees in Moria on the Greek island of Lesbos was set on fire. For years, the refugees on the small island lived crowded together in the smallest of spaces under the most humiliating conditions. Again and again they succeeded in attracting attention and sympathy in the EU and in appealing to the remains of bourgeois morality, but the EU did not allow real humanism to prevail. What is this sick world in which people are driven to set fire to their own camp to draw attention to their fate? Barely 3 weeks later, on September 26, Amy Coney Barrett is nominated for the Supreme Cort in the White House. She is a legal hardliner against Obama’s health program and an anti-abortion campaigner. While crowds are banned all around the White House in Washington because of the pandemic, Trump and his allies celebrated a humid and cheerful Corona party in the White House. There were hugs, handshakes and nobody really wore masks here, which is why a large part of his administration including the president himself was infected with the corona virus.

While some partied in spite of pandemic circumstances and now enjoy the best medical care, thousands are stuck on the Greek islands and the mainland, cut off from medical care. Liberals and leftists around the world have understood that this has nothing to do with fairness. In Germany, thousands took to the streets in many cities and demanded the immediate evacuation of people and the welcoming of refugees into the communities. With #WirHabenPlatz (#WeHaveSpace), #LeaveNoOneBehind and #Seebrücke, an anti-racist movement has established itself in Germany and internationally over the past months and years. Well-connected at the local level, this movement has always ensured at the right time that the EU’s cruelties at its external borders are not forgotten, and has created structures that are organized in a non-parliamentary and grassroots democratic way and thus are able to catch up with large parts of the liberal political camps.

“The moral compass is off.” (Some German on some TV Show) 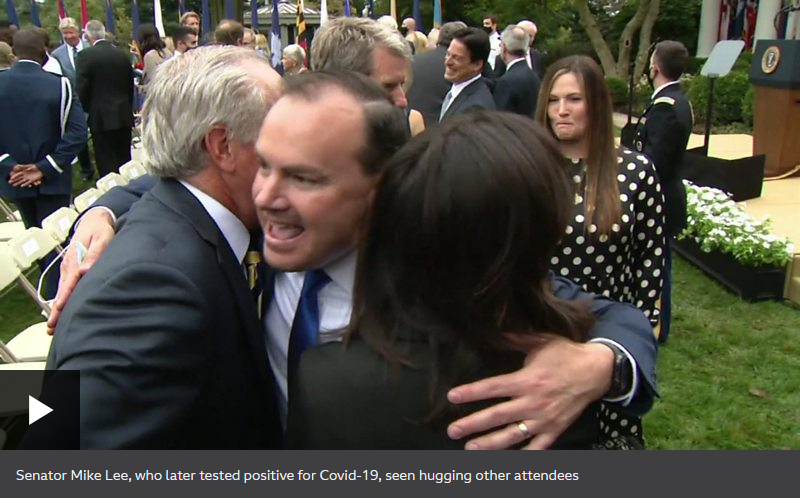 Practical action was then taken: Horst Seehofer, German Home Secretary, himself a Corona crisis manager and recently a sudden critic of racism, demanded the admission of a few hundred particularly vulnerable people and was able to present himself as a humanitarian on a European scale. While in 2018 the #Seebrücke had used his “anchor centers” (camps in which refugees would be held in isolation while their case was evaluated) as an opportunity to rebel against the federal government’s asylum policy, two years later he can stage himself as a liberal and humanist. The Corona Party in the White House can not only be described in terms of moral errors  either: The President of the United States, who since the outbreak of the pandemic has had the death of thousands of Americans on his conscience because his policy denied them access to medical care and recommended the loyal state inmates to drink aquarium cleaners against the treacherous virus, manages to inspire compassion and to receive global wishes for recovery. That instead people wish him a severe course and a painful death is understandable, but the wrong answer. It’s the other way round: Neither Trump nor Seehofer will put an end to the dying of the nationally excluded and pauperized class. Rather, their openly fascist or supposedly philanthropic policies are an expression of growing nationalisms. As sovereigns of their nations, both defend the national borders and need the national identity on the inside to keep them separate from the outside.

All a question of morality?

These times are terrible. The fear of an infection with the deadly virus is growing, while questions of health care, freedom of movement and migration continue to intensify. What is hidden behind the morally loaded memes, talk shows and net politics are the questions that really matter: What can a society look like in which national borders do not decide on life and death and the socio-economic status of everyone decides on their health care? The prosperity of the global North cannot be redistributed so easily and different neo-fascist governments have unfortunately been able to establish themselves in recent years and enjoy great support from their loyalties. The moral compass of any society depends on the conditions under which it exists. If the Left wants more than share pics and 280 (Twitter-)signs to articulate anger, we must be the motor that changes the conditions for morality. For this, we need to determine at what time and in which fields the living conditions of the next years will be decided under the consequences of the Corona crisis. Or, to try it with Brecht: Food is the first thing, morals follow on.

By Jonas Wagner and Mia Wyborg

The authors are based in Germany and active in social struggles and the antifascist NIKA campaign. The campaign was founded in Germany in 2016 to fight the European right-wing movement in an organized way.