Check it out
You are here: Home / ...ums Ganze! / Climate justice or brawl! 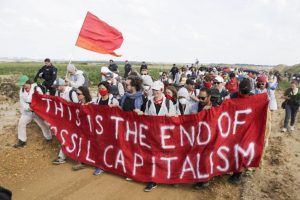 They, that is RWE AG, the energy-dependent industry, that is investors who are relying on everything going on as before. They are the federal and state government and the German-dominated European Commission. All those involved know what’s happening, and coal is still being produced.

Angela Merkel and other politicians looked at the appeals and mass demonstrations with a slight nod, but they weren’t really impressed. The coal phase-out should continue to come only when the last piece of coal has actually been burned. Because as someone once said: The modern state power is only a committee that manages the common business of the whole capitalist class. But we cannot expect anything else, because fossil capital provides the energy for the entire class. And the unity of property and the existing order is vehemently defended. As much as some may wish for a green capitalism: it will never be, because there is no decoupling of growth and resource consumption – these are just fantasies. The ruling class is the idealist, dreamer, unworldly.

Those responsible are the saboteurs of any effective climate policy and any humane coexistence, because the latter stand in the way of their business model and growth compulsion. They threaten to sue the states if their operating license is revoked. They threaten to leave workers in poverty and to worsen working conditions. They take away people’s time, our health and the resources we need to live. They will not stop their sabotage by themselves, they must be stopped. And if no one else can stop them, we must. If we stop their machines, we drive up the costs. Until it no longer pays off. We will stop the madness where it takes place. That is why we are joining the actions of Ende Gelände in the Rhineland from September 23 – 27, 2020.

Let us sabotage the saboteurs.

See you in the pit!