Check it out
You are here: Home / Featured / What’s behind the attacks of the “Grey Wolves” in Vienna

After a Kurdish feminist rally in Vienna-Favoriten was attacked by Turkish fascists on Wednesday, hundreds of anti-fascists took to the streets against this attack on the following day. After yesterday’s demonstration the fascists escalated the situation again and attacked the EKH, an occupied house in Vienna, with a mob of about 200 to 300 people. Stones, bottles and incendiary devices flew on the squatted house, which is shared by left-wing migrant organisations and anarchist aligned squatters.

We have translated an article by Zeynep Arslan (@zeynemarslan) from the Austrian Mosaik Blog to give you a first overview and analysis of the situation. The antifascist demonstrations are organized under the motto Faşizme karşı omuz omuza! – Side by side against fascism! Try to find an answer on the streets!

The noise of the police helicopters could be heard late into the night yesterday. For a long time no peace and quiet returned to the streets of Vienna-Favoriten. It all began with a rally by a Kurdish women’s organisation based in the Ernst Kirchweger Haus (EKH). The participants wanted to point out the increasing number of feminicides in Turkey and Austria. They wanted to show what the effects of anti-women policies are, which can be seen, in the privatisation and destruction of women’s shelters in Salzburg for example.

Then the women were attacked by a group of fascist men. Within a very short period of time, around a hundred right-wing extremists appeared, and a large-scale police operation was launched. The women fled to the EKH and had to stay there for hours for security reasons.

Not the first attack 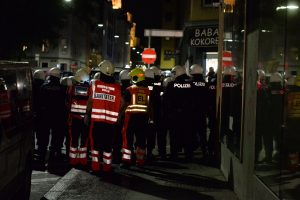 It wasn’t the first attack in the district. Similar incidents occurred on Mayday on the fringes of a rally on Keplerplatz. And a pattern is emerging: the extreme right-wing group of young men seems to have no fear of the security forces, who were even supported by two police helicopters last night.

Two to three young people can turn into fifty to a hundred within minutes. They act as owners and guards of Favoriten and want to supervise their district. They forbid residents and visitors to events to consume alcohol during the Muslim month of fasting Ramadan. They try to keep Kurdish music and language out of the public. They also like to sic the police on Turkish-Kurdish participants of events – with the insinuation that they are followers of the PKK (Kurdish Workers Party). Self-confidently they accuse the police and the Austrian state of allowing a terrorist organisation to take over public space. They mobilise each other via their mobile phones and are organized in hierarchical roles. 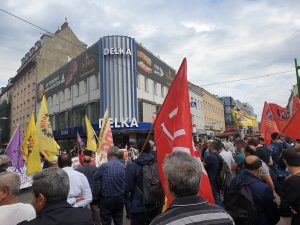 The group’s world view is shaped by the political ideas of Turkish President Recep Tayyip Erdoğan. They position themselves as his defenders and do not shy away from making the wolf salute (comparable to the Hitler salute as a distinctive sign of Turkish fascists), which is forbidden in Austria, in the presence of the police.

How is it possible that young people who were born in Vienna and Austria internalized such an unreflected racist Turkish way of thinking and generalized hatred? Unfortunately the omnipresent discrimination in Austria favours the propaganda of the Turkish right-wing extremists. Young people who regularly experience exclusions according to the motto “You are and can be with us, but you will never be one of us” can never feel equal rights and equal treatment. This structural and institutional racism prevents a common, pluralistic understanding of democracy across cultural and national affiliations.

An offer for the excluded

The male “us” narrative à la Erdoğan offers these young people an identity, even if it is constructed and artificial. The corresponding messages and war propaganda from Turkey reach them daily – and are received by them uncritically and without reflection. When they are confronted by others because of their attacks, they declare that despite their citizenship and perfect German they will remain foreigners forever and ever. Their disorientation provides fertile ground for right-wing extremist propaganda.

The young people born in Austria take on the megalomania of “Turkishness” across borders. Basic democratic rights obviously have no place in this. That’s why they attack marginalized groups from their supposed “own” cultural circle: Kurds, Alevis and women. For them, their rights are part of the “corrupt Christian strangeness” in which, in their opinion, they live. They seem to have found a feeling of belonging only in the group. In the group they feel strong – but even a rally against violence against women becomes unbearable for them and threatens their male power.

So we are dealing with an aggressive inferiority complex. It is rooted in a constructed legitimation of identity, that refers to Turkish history. It begins in the steppes of Central Asia, continues through the invasion of Anatolia, the collapse of the Ottoman Empire and migration into the European diaspora. Various massacres, genocides and defamations in the course of the formation of the Turkish nation state a good hundred years ago are also part of this legitimation.

The Turkish state doctrine grants them the international privileged status of “Turk-Turkish-Sunni-Muslim Man”. To defend the leader and the fatherland, even far from Turkey, any use of force is justified. This can also be seen in violent anger against women.

Against racism and sexism, no matter from where 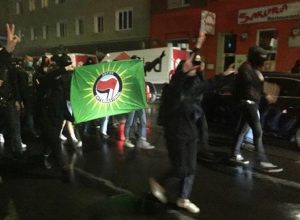 Last night the self-proclaimed “guardians of Favouriten” were able to carry out their second action this year in front of the Austrian public. Prior to this, their attack was directed against the May Day rally on Keplerplatz. These developments can no longer be ignored. Behind them lies a political power structure that operates transnationally. The young men are only a pretense. The structures and ideologies behind them reach as far as Turkey. A trivialisation of the current incidents would be irresponsible towards the future.

What is needed is courageous action against all forms of racism, which goes hand in hand with sexism – no matter what corner it may come from. Each and every one of us must democratically engage and take responsibility for our common future. The world views that further stabilize a male-dominated ideology must be broken up. The patterns and motivation for racist and sexist violence and incitement to hatred are always the same: the perpetrators want to compensate for their own feelings of inferiority and the existential fear associated with it. After all, the young right-wing extremists are not as strong and courageous as they themselves believe.