Check it out
You are here: Home / Exchange / “The Revolution has been televised”

…a call for participation in the current movement

Translation of an article by Antifa AK Cologne

“When you talk about a revolution, most people think violence, without realizing that the real content of any kind of revolutionary thrust lies in the principles, in the goal that you’re striving for, not in the way you reach them.”
–Angela Davis

3 weeks ago, the African-American George Floyd was brutally murdered by police officers. Since then, an anti-racist wave of protest against police violence and White Supremacy has been spreading, which is being taken up internationally. In France, England, Brazil, the Czech Republic, Canada, but also in Germany, masses of racialized people and those standing in solidarity are taking to the streets in the middle of the pandemic. In the various countries where protests are taking place, different social situations exist from which the uprisings arise. White Left activism must show solidarity with the struggling organisations and movements of black people and people of color and recognise their spearhead role in the anti-racist struggle. We are communists from Germany who participated in the protests in Cologne and would like to present some analyses and theses on the current #BlackLivesMatter movement.

#BlackLivesMatter is a revolutionary rebellion against racism

In the USA, black people make up 13% of the total population, but at the same time 33% of corona patients who need hospital treatment. They suffer from poverty-related pre-existing conditions, such as diabetes, much more frequently and receive much worse health care, as they are much more likely to be affected by poverty. Black people are more than twice as often victims of murder by police officers than white people. The murder of George Floyd was certainly not an isolated case, but the straw that broke the camel’s back. The massive rage that is currently erupting everywhere merely makes these brutal facts visible. The images of the riots and the looting in the USA are by no means frightening, as postulated by bourgeois media, but are an expression of the need to upset the murderous status quo. One could plunder for a lifetime; this would not replace what capitalism stole. 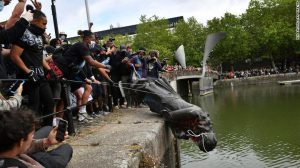 The movement has already had some success. 54% support in the US-population for the burning Minneapolis police department speaks for itself. Now the police department there is to be disbanded. Worldwide, the #BlackLivesMatter protests have caused colonial monuments glorifying slavery to be hit, as in Bristol and Brussels. These successes would not have been possible without the far-reaching mass militancy. No petition had achieved this before. In Germany no monument has been tackled so far. Some influential political figures externalize the problem: it is an American phenomenon. Former faction leader of the Christian Democrats, Friedrich Merz, claims that there is no latent racism in the police. The facts tell us something else: since 1990, at least 159 People of Colour and black people have died in police custody in Germany. The racist terror does not only come from the state, but also from racists and fascists who have killed at least 209 people since 1990. In Germany racism is present everywhere. The rulers do everything to make it ignoreable for the majority of society – to the murderous disadvantage of those targeted by racism.

#BlackLivesMatter questions the state of capital

The internationalization of the protests makes three things clear: racism and capitalism are inseparable. Racist plundering only works with social pacification and class contract. The bourgeois state plays a central role here: it secures the capitalist normalcy, and thus inevitably also the racism that supports it and shapes it. That is why it and its personnel are now faltering in the face of the internationalization of the uprisings that are continuing in many places. The uprisings, when they attack systemic racism, necessarily attack the whole system. Civil liberties will only be accepted by those in power if the social movements can be integrated into the status quo. And: Where understanding is expressed in another country about the protest, it is usually unpopular as soon as it is directed at one’s own ruling class and it does not remain peaceful. But the renewed protests in Atlanta also make it clear that the state can try to pacify its inmates with reforms and at the same time fight the uprising with the help of the military, but also gets massive headwind from the internationalization of the protests. Whether Trump, Bolsonaro, Macron or Johnson: They are currently getting a lot of fire under their asses.

Social movements are spontaneous and concrete

The last social movements had a subjective factor and lived on spontaneity, which caused their rapid growth: whether it was the students of Fridays for Future, who will still feel the effects of the climate catastrophe during their lifetime, or the women’s movement, which attacks the systematic double exploitation of gendering under capitalism worldwide, or the BLM movement, which makes the daily murderous threat to black people visible. Social movements take up and attack the contradictions concretely: Whether racist police violence, patriarchal and sexual exploitation or the climate catastrophe. The fight for the whole can only be won by expanding the struggles. Where systematic oppression by domination is made a problem of individuals or certain groups, the so-called “progressive neoliberalism” beckons with quotas and ridiculous reforms like body cams to satisfy the state inmates. Revolutionary answers to the crisis do not speak of individual perpetrators and redistribution. With #DefundThePolice the police as an institution is questioned. Meanwhile, in Hamburg and Berlin it quickly became clear how the smallest spark of resistance against police officers is dealt with. We have to attack racist structures and institutions, as well as colonial continuities, where we live and struggle. In other words: disempowering capital and the perpetrators of violence and expropriating the rich.

Black culture is a means of revolutionary rebellion

#BlackLivesMatter feeds off the anti-colonial struggles of the Black Power movement. Black culture plays a central role here, which in turn comes from a resistant tradition and poses questions of social representation and participation radically from below, but at the same time has gained quite a high popularity. Without this popularity, the wave of protest would not have been able to internationalize so quickly. In the German public and the German left, black culture is marginalized, as is knowledge of the struggles of movements and organizations. Often black voices are overheard, or their critical sting is removed. Afro-German communists, like the resistance fighter Hilarius Gilges, who was brutally murdered by the Nazis in 1933 in Düsseldorf, or the partisan fighter Carlos Grevkey, who was also murdered by Nazis, are not well known in the anti-fascist German left. This statement is directed as a criticism of ourselves, as part of this movement.

#BlackLivesMatter is the continuation of the Black Power Movement 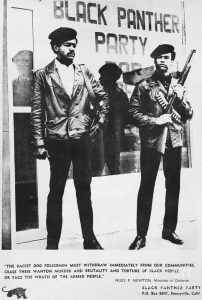 Racism is treated as a problem and, across different political camps, as structural violence. Even Horst Seehofer (German minister of the interior) and others say: We have a racism problem. This could be seen as a discursive victory for interventions critical of racism. The problem is: the legitimate questions about representation of black people and PoC, as soon as they are taken up by the Congress, the EU Parliament and the Bundestag, lack the class standpoint. Intersectional research and theoretical approaches are very vulnerable to being turned against themselves, as they have already been appropriated by the bourgeois academic sphere. The realization that many social conflicts and injustices of our time can be interpreted on the basis of the categories race, class, gender, does not necessarily put them in conflict with the capital relation. In contrast to this is the notion of striving to overcome capitalist rule, which is expressed through class relations, racism and gender relations. The difference lies in the fact that in comparison to diversity-oriented and racism-critical approaches, capitalism as a whole is denounced. Racism and gender relations are by no means a side contradiction to class relations. They are historically closely connected and can only appear to be interwoven with each other. Thus this theory differs from bourgeois theories by two central features: It has a Marxist basis on which to argue. That is, it goes beyond the categorization of inequalities. Secondly, in contrast to academic intersectionality theory approaches, the theory of triple oppression in particular aims at the revolutionary overcoming of capitalism. Or, to use Bobby Seales (Black Panther Party) words:

“We are an organisation that represents black people and many white radicals relate to this and unterstand that the Black Panther Party is a righteous revolutionary front against this racist decadent, capitalistic system. Our organisation doesn’t have any white people as members. If a white man in a radical group wants to give me some guns, I’ll take them. I’m not going to refuse them because he’s white.”

The truth is always concrete 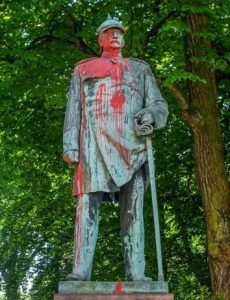 If we as leftists want to make our contribution to the BLM movement, we must intervene practically and locally. For Cologne, a minimal catalogue of measures would be the abolition of the construct of “dangerous places” (a rationalization for stop and frisk), such as the Domplatte and Ebertplatz, an end to racist police controls, #JusticeforKrys (a young man shot and by a conservative politician), Herkesin Meydani – a memorial in Keupstraße (where nazi terrorists detonated a mailbomb), the private accommodation of fugitives and to dump the Kaiser Wilhelm statues in the Rhine. Nationwide: the disarmament of the police, the return of colonial looted goods, immediate debt relief and reparations payments for former German colonies, a reappraisal of the involvement of German shipbuilders and financial houses in the slave trade and the evacuation of all camps. Those who do not want to talk about colonialism should also keep quiet about capitalism.