Check it out
You are here: Home / Action / Migrant agricultural workers strike in Germany

The wildcat strike of Romanian agricultural workers in Bornheim shows that struggles are possible even under conditions of racist super-exploitation. Originally published on akweb.de.

On Friday, 15th of May, some of the 250 seasonal workers of the Spargel Ritter company in Bornheim (North Rhine-Westphalia) stopped working in the asparagus and strawberry fields and informed the local press. Management called the police, but the intimidation attempt failed. The strike was covered widely by the media.

The workers are angry because they received ridiculously low wages of 100 to 250 euros instead of the promised 1,500 to 2,000 euros, and because they are housed under inhuman conditions in a container warehouse, idyllically located between a cemetery and a sewage plant on a vacant building site. As a result of the strike, they were immediately threatened with early dismissal and expulsion from their accommodation. Spargel Ritter has been bankrupt since March 1st, according to other sources even since January, and is now managed by the law firm Andreas Schulte-Beckhausen in nearby Bonn. In April, the firm hired both foreign seasonal workers and labourers from Germany without informing them that the company is in a state of insolvency. Obviously the insolvency administrator is using all means necessary to make the company attractive to new investors.

The protest continued on Monday, 18th of May with a rally organised by the anarcho-syndicalist trade union FAU at the accommodation containers, which was attended by about a hundred external supporters. Women workers in particular protested against their exploitation, making impressive and angry speeches. Afterwards, all of them demonstrated together in front of the company’s nearby yard, where some of the outstanding wages were alleged to be paid. Instead, the workers were expected by a chain of police officers and aggressive security guards. It quickly became clear that the strategy of the insolvency administrator was to divide the workers and set them against each other: Some were paid 600 euros, others only 50 or 70 euros. The security guards opposed the presence of a FAU lawyer during the payments, until the police enforced the lawyer’s presence. While the isolation of migrant workers usually means that this type of super-exploitation is largely ignored, the Bornheim case caused a nationwide sensation. Monday was a difficult day, as FAU Bonn tweeted: “A hard day is coming to an end. Even though we cannot be satisfied with the result: The fact that the wages of a few hundred euros were paid at all is a panic reaction of the class enemy. Tomorrow we will enter round 2.” 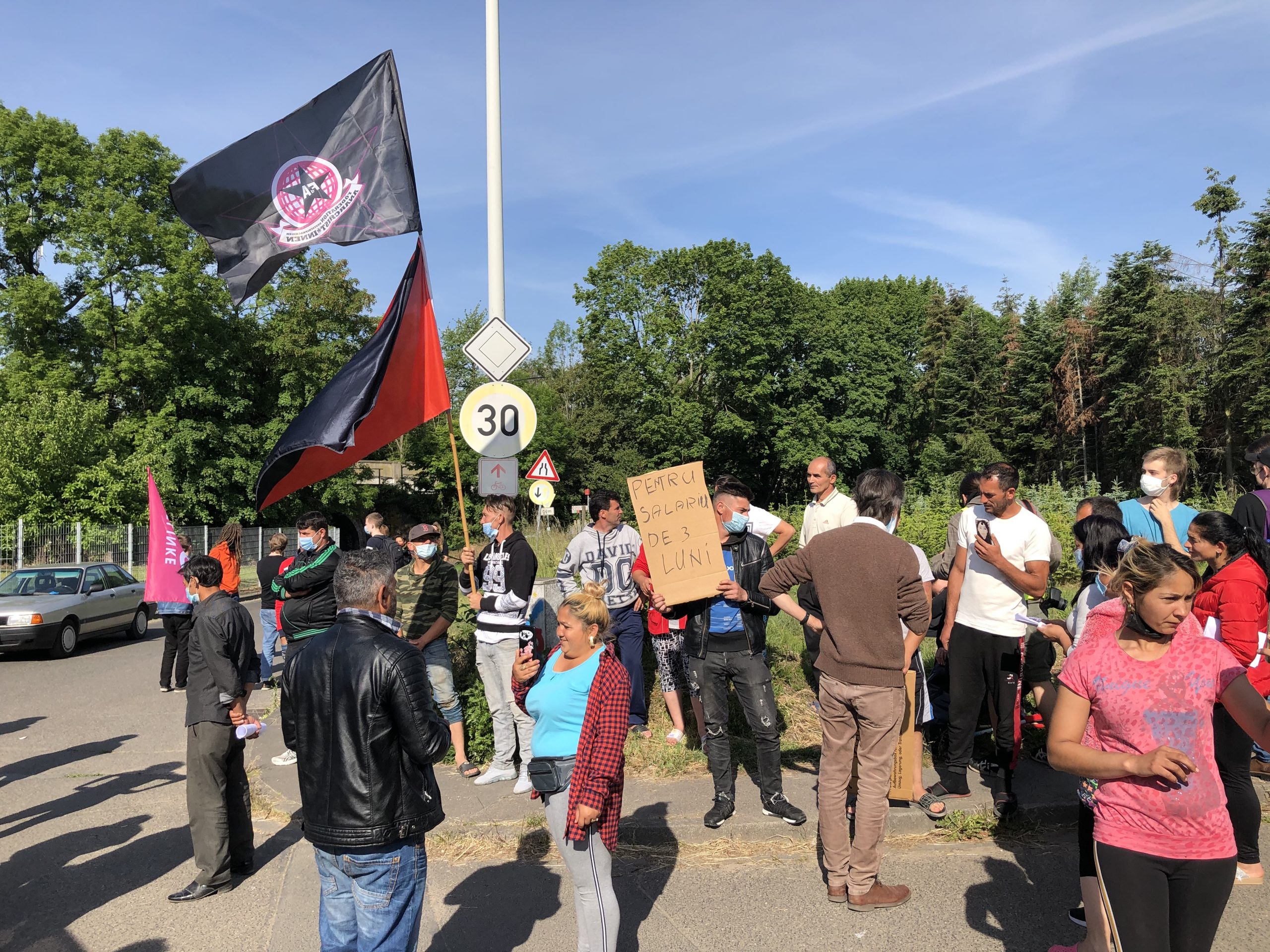 On Tuesday, the seasonal workers and solidarity activists met for another rally, this time in downtown Bonn, outside the insolvency administrator’s office. From there they went to the Romanian Consulate General, where a delegation of ten workers was received. The consul admonished the workers to be calm and considerate. They should return to their accommodation and wait – because the Consul is in contact with the Romanian Minister of Labour Violeta Alexandru, who is in Berlin at the invitation of the German Minister of Agriculture Julia Klöckner. According to the Consul her second stop after Berlin happened to be Bonn anyway, where she would meet with the Farmers’ Union.

On Wednesday, the minister actually showed up at the lodgings. After a long conversation with the Romanian workers – in which no trade union representatives were allowed – she announced that “everything was settled”: the insolvency administrator had assured her that she would push ahead with the payments, and her ministry would organize a free return to Romania or, in agreement with the German Farmers’ Union, the transfer to another company. After their departure, buses picked up groups of ten workers each for payment at an unknown location. The supporters together with the workers were able to make sure that a lawyer and interpreters were present for all payments, but they had to hand in their mobile phones first.

Since this dubious payment procedure could not be trusted, supporters followed the buses to “unknown places”, which a visibly disoriented police officer tried to prevent them from doing. It came to absurd wild-west-style chases across the strawberry fields, until the busses stopped at a field, where the payments were made in the burning sun. The lawyer made sure that the workers didn’t sign any termination agreements, and many gave him the power of attorney to check their wage claims in court. The FAU announced on Wednesday evening that the minimum target had been reached.

The fact that not all the workers from Romania and a few from Poland took part in the strike is due to the division caused by different contracts. Those workers with contracts running until September instead of only until June who were also promised higher wages saw their contracts of employment endangered by the strike and criticised the unrest that had arisen. In addition to the foreign seasonal workers, about 200 labourers from Germany have been hired since the end of April. As one worker from this group told us, they are called the “German team”, even though they come from all kinds of countries, but are resident in Germany. It is a motley crew – young people who have responded to the call to help “our” farmers to protect the harvest, and people who simply need the money urgently because of short-time work or unemployment. Unlike the workers from Eastern Europe, they are not employed on a piecework basis, but on an hourly wage, and receive a few cents more than the minimum wage of 9.35 euros, to mark the racist differentiation. Another reason for this is that the untrained workers from Germany would not have been able to work at the same pace as the Eastern European workers, who have been doing this kind of work for longer.

At work, the “German” and “Romanian” columns – these are the divisive terms used by the bosses and their foremen – are kept strictly separate when working in the strawberry tunnels, but they run into each other when the full crates are handed over. However, communication usually fails because of the language barrier. On Friday it was noticed that the “Romanian column” was missing, but it seems that word of the strike didn’t get around to the “German column” until Saturday. After the “German column” had continued working on Saturday and Monday, they were sent home for a day on Tuesday because according to the bosses the situation was too heated. 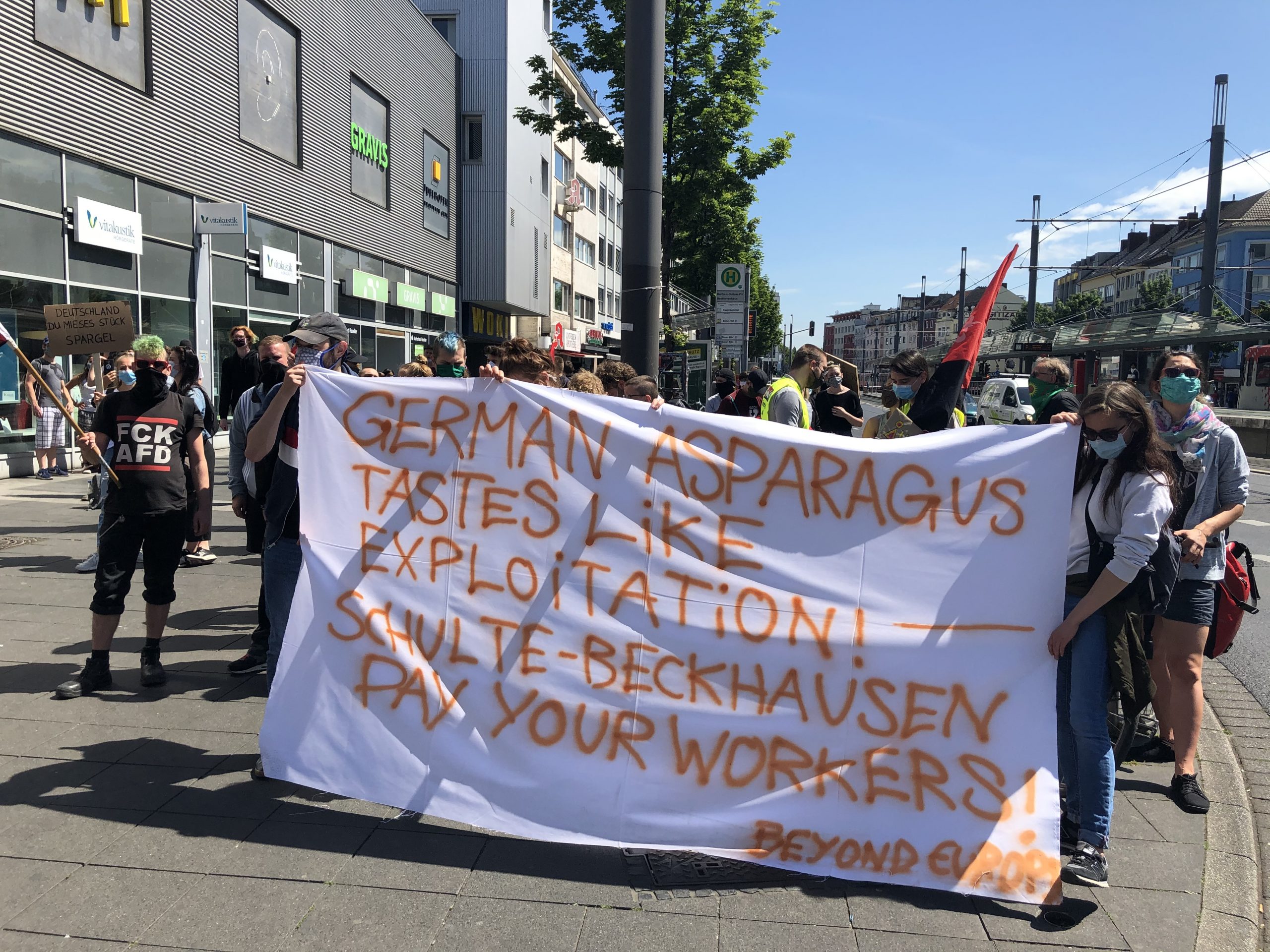 In the past weeks there have been increasing reports on the miserable working and living conditions of agricultural and slaughterhouse workers in Germany. The main reasons for this are the inhumane living conditions to which the workers are exposed and which are even more threatening in the current corona situation due to the lack of protection against infections. While Germany celebrates its low number of cases, it is not surprising that infections break out in places where people live and work under particularly precarious conditions. The refugee accommodation in Sankt Augustin, the slaughterhouse in Dissen and a deceased Romanian field worker in Baden-Württemberg are examples of these scandalous conditions.

A wildcat strike, from which we can learn a lot

The Romanian field workers were initially left on their own. Their outcry was heard by left-wing supporters – above all the FAU. And what about the IG BAU, the mainstream construction union? And the DGB federation? Members of parliament? No chance! With little money and few resources, FAU Bonn managed to support the workers in every step, despite the language barrier – a prime example of concrete solidarity.

This struggle shows above all that even the precarious and unorganised can defend themselves. This experience gives courage for the future. And it remains to be seen whether those who have now been placed on other farms through the Farmers’ Union will carry the strike virus to other fields. In Romania, all major daily newspapers have reported on the strike in Bornheim. This, too, could strengthen the self-confidence and entitlement of the seasonal workers.

In the Corona crisis, in view of the danger of infection, numerous social grievances have become the subject of discussion, which were already disastrous before Corona, but remained hidden for years. In a situation of crisis, people might initially deal with the burdens and troubles on an individual level. But in various sectors, micro-processes of resistance are currently taking place that can easily develop into collective struggles. In some cases these struggles come together, in others the divisions and hierarchies need to be broken through.

Alice Claire is an activist from Cologne and member of Beyond Europe.

Christian Frings is an activist, author and translator (of David Harvey and others).

John Malamatinas is a freelance journalist from Berlin, Brussels and Thessaloniki.