Check it out
You are here: Home / Action / Europe – Nothing but a shame – Statements by youngsters from Moria

For more than two weeks, young people from Fridays For Future in Germany have been on hunger strike. From the very beginning the protesters in Germany tried to establish a contact to youngsters at the Moria refugee camp. At a joint press conference on 19th of May, young people from the Moria slum camp prepared and read out very moving statements. Two youngsters from the small German town of Landau. Under the name “Colored Rain” they called on people to join their protest. Sooner said than done: Another hunger strike by a person from Dresden followed. Also in Trier two other activists joined the action. On May 19, the hunger strike in Landau was ended by a protest march to the state capital Mainz. There their demands were symbolically handed over to the state government. Earlier, the activist from Dresden had already ended his action, while the hunger strike in Trier continues.

The youths criticized above all the inactivity of the politicians in meeting the demand to evacuate the camps. Even if the hungerstrike is now partly done, the exchange between the young comrades from Germany and Moria is still active. This is an important thing to strengthen each other and create a common understanding of a joined fight against the border regime.

The situation has not improved. The European migration regime is too deeply inhumane, Moria is an example of this. So let us fight together to counter the policy of exclusion and dehumanisation. The words of the young people of Moria urge us not to give up this fight! 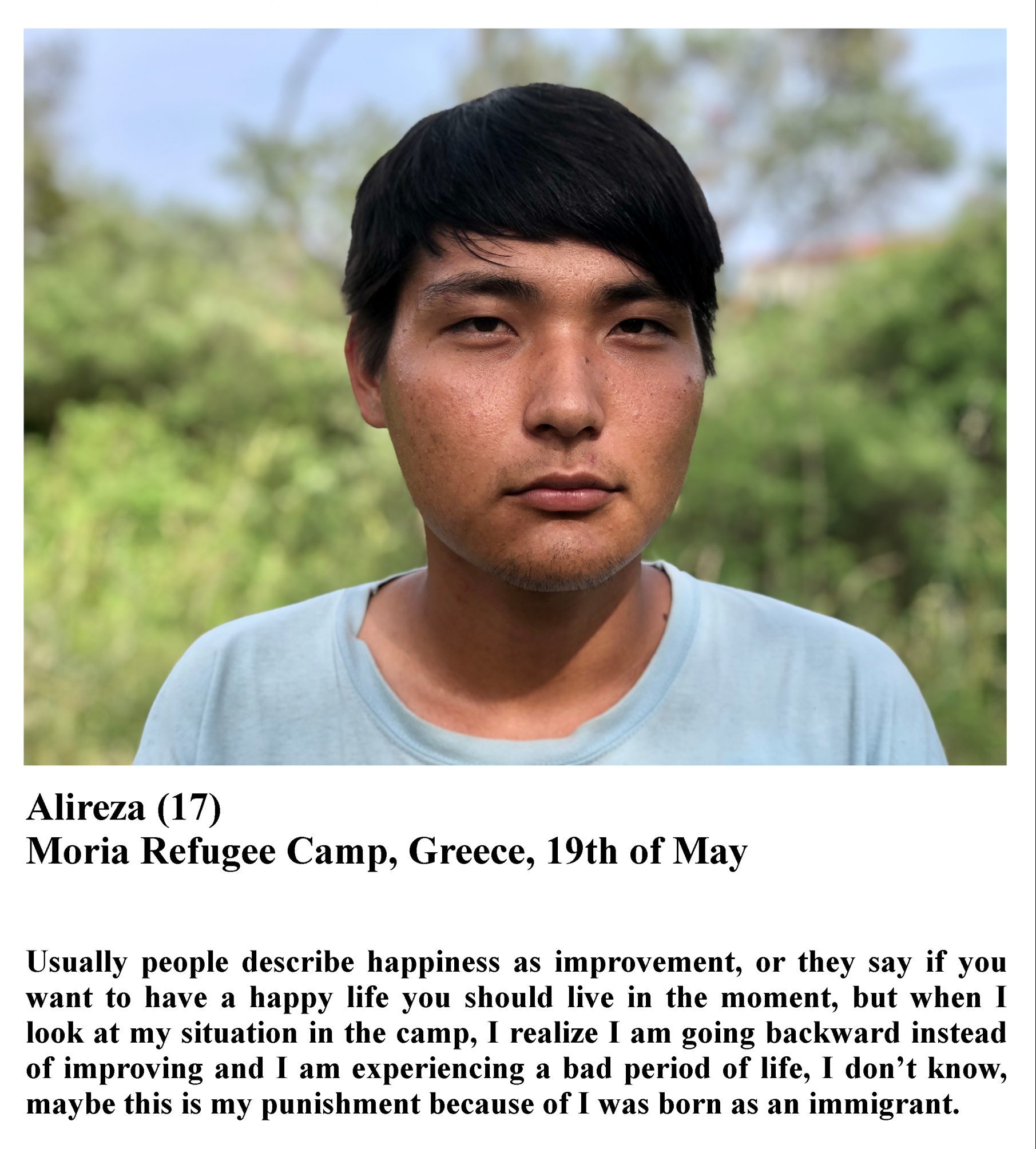 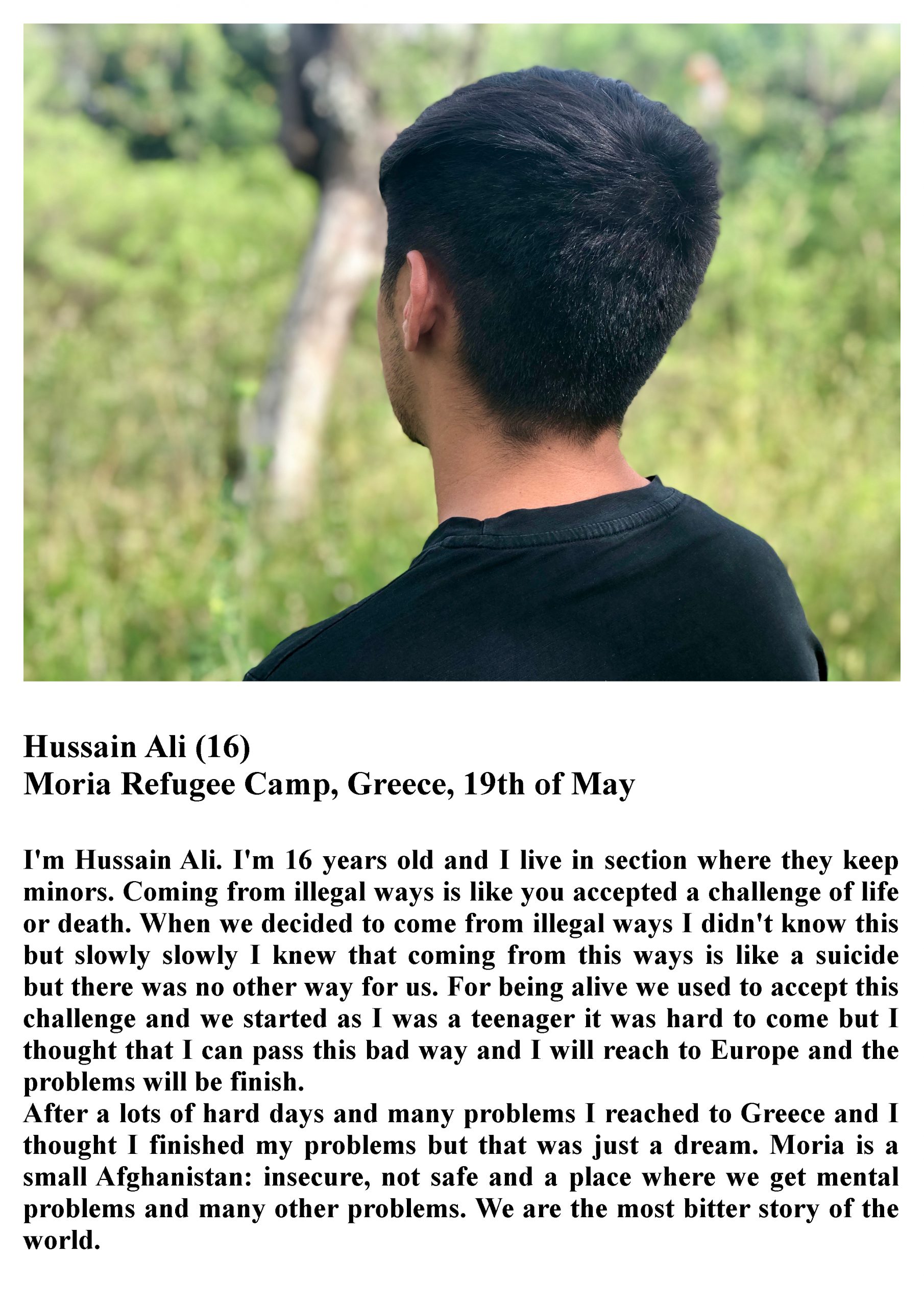 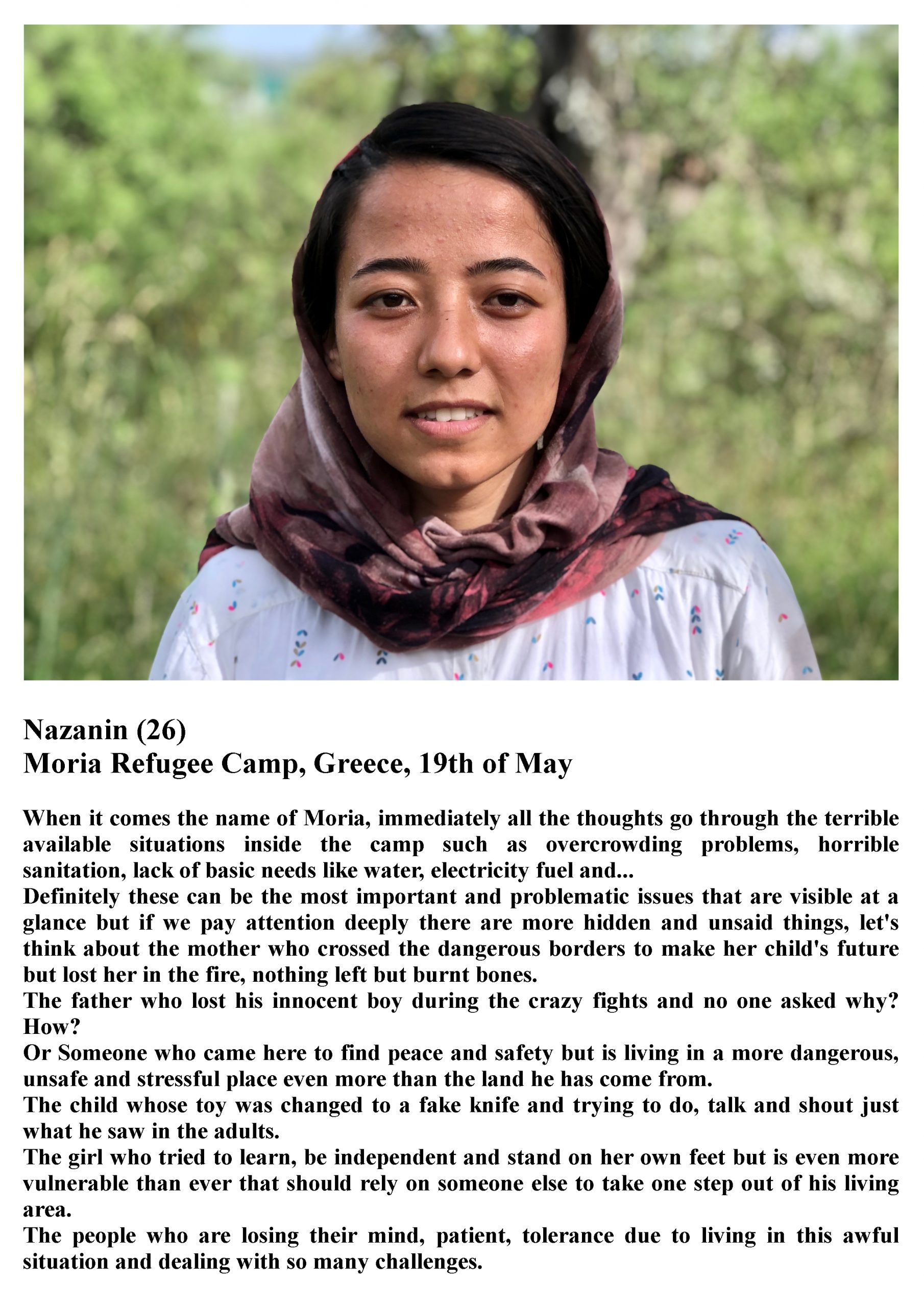 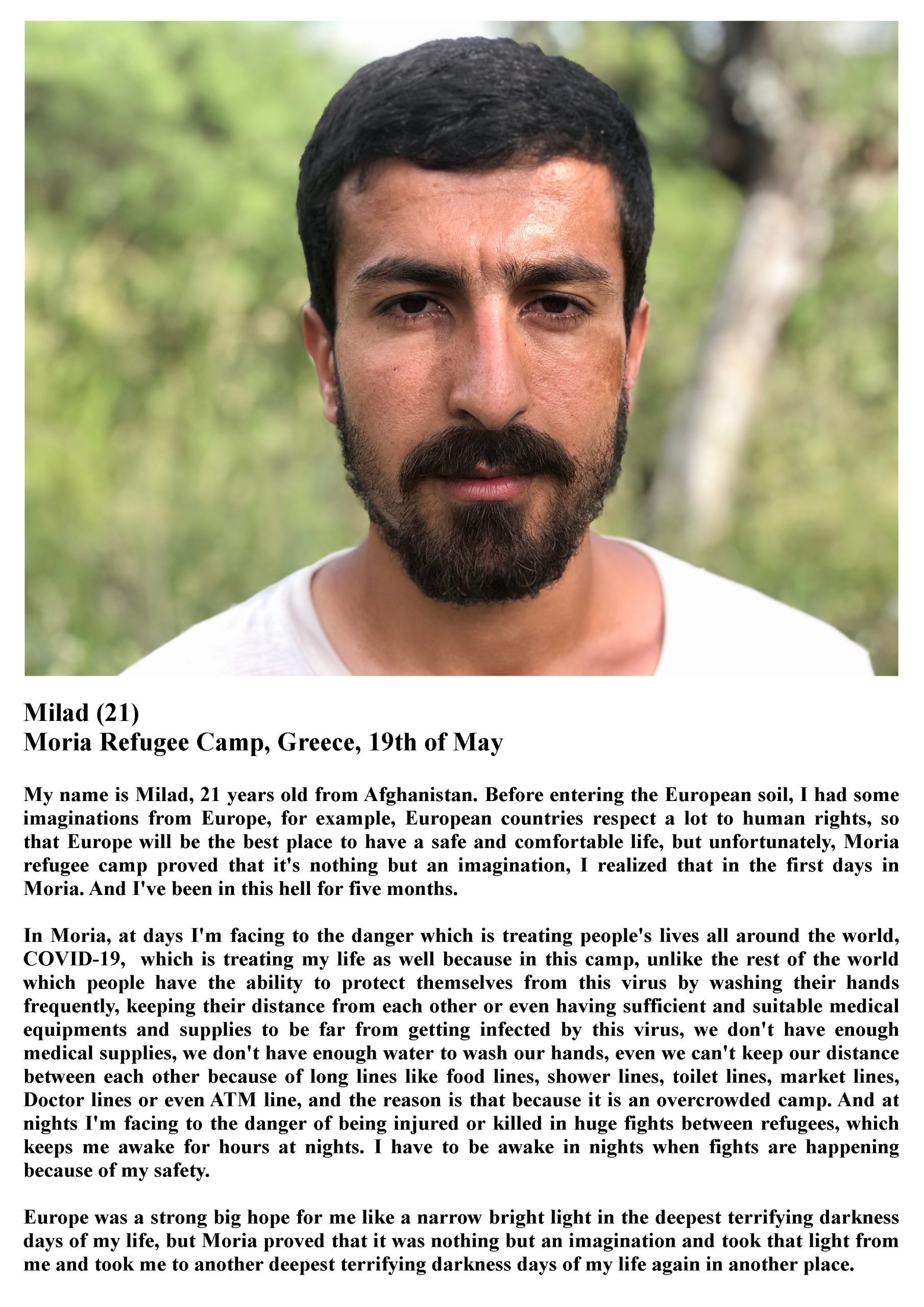 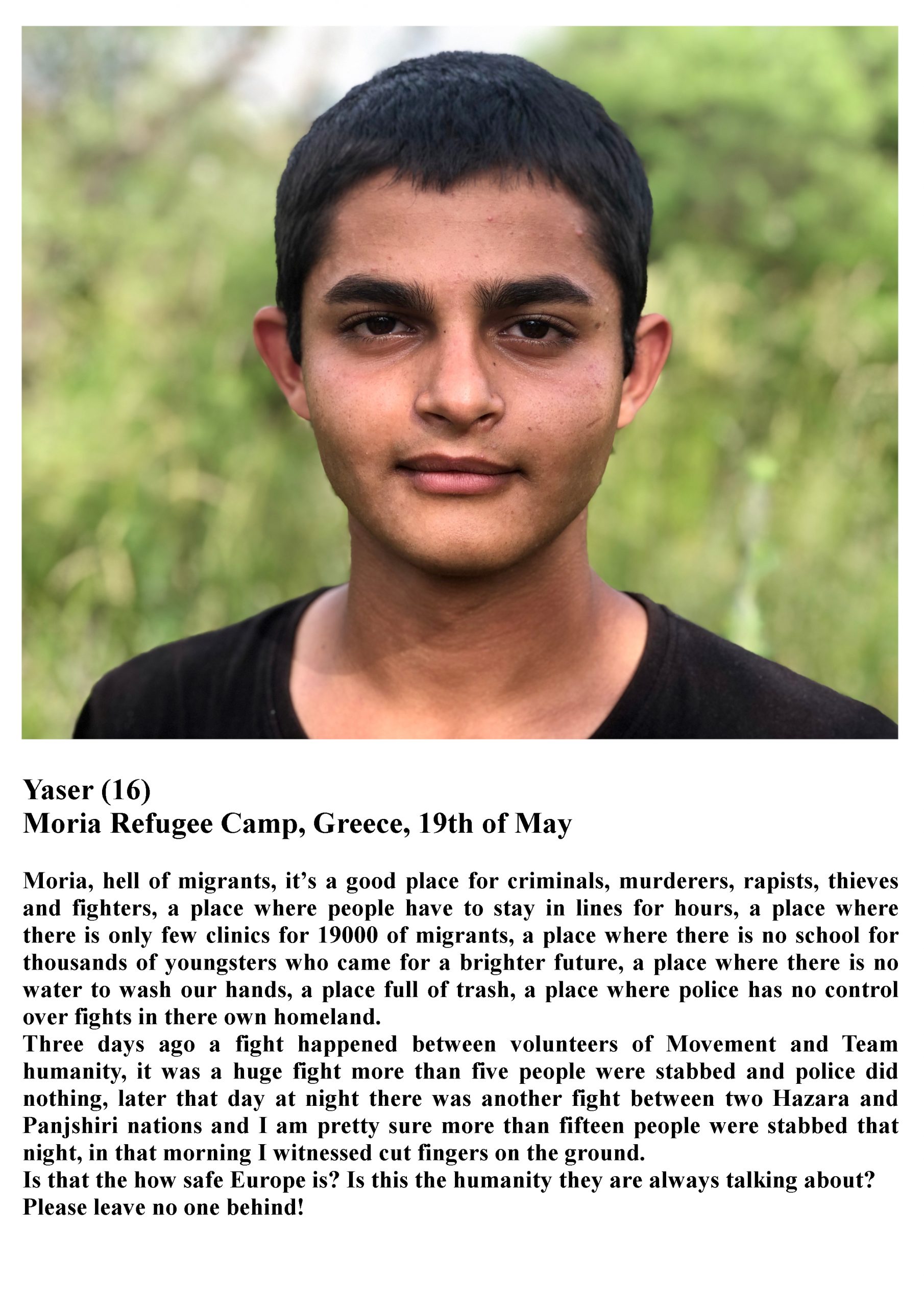 The statements in text form:

Usually people describe happiness as improvement, or they say if you want to have a happy life you should live in the moment, but when I look at my situation in the camp, I realize I am going backward instead of improving and I am experiencing a bad period of life, I don’t know, maybe this is my punishment because of I was born as an immigrant.

I’m Hussain Ali. I’m 16 years old and I live in section where they keep minors. Coming from illegal ways is like you accepted a challenge of life or death. When we decided to come from illegal ways I didn’t know this but slowly slowly I knew that coming from this ways is like a suicide but there was no way for us. For being alive we used to accept this challenge and we started as I was a teenager it was hard to come but I thought that I can pass this bad way and I will reach to Europe and the problems will be finish.After a lots of hard days and many problems I reached to Greece and I thought I finished my problems but that was just a dream. Moria is a small Afghanistan.insecure, not safe and a place where we get mental problems and many other problems.

We are the most bitter story of the world.

When it comes the name of Moria, immediately all the thoughts go through the terrible available situations inside the camp such as overcrowding problems, horrible sanitation, lack of basic needs like water, electricity fuel and…

Definitely these can be the most important and problematic issues that are visible at a glance but if we pay attention deeply there are more hidden and unsaid things, let’s think about the mother who crossed the dangerous borders to make her child’s future but lost her in the fire, nothing left but burnt bones.

The father who lost his innocent boy during the crazy fights and no one asked why? How?

Or Someone who came here to find peace and safety but is living in a more dangerous, unsafe and stressful place even more than the land he has come from.

The child whose toy was changed to a fake knife and trying to do, talk and shout just what he saw in the adults.

The girl who tried to learn, be independent and stand on her own feet but is even more vulnerable than ever that should rely on someone else to take one step out of his living area.

The people who are losing their mind, patient, tolerance due to living in this awful situation and dealing with so many challenges.

My name is Milad, 21 years old from Afghanistan. Before entering the European soil, I had some imaginations from Europe, for example, European countries respect a lot to human rights, so that Europe will be the best place to have a safe and comfortable life, but unfortunately, Moria refugee camp proved that it’s nothing but an imagination, I realized that in the first days in Moria. And I’ve been in this hell for five months.

In Moria, at days I’m facing to the danger which is treating people’s lives all around the world, COVID-19, which is treating my life as well because in this camp, unlike the rest of the world which people have the ability to protect themselves from this virus by washing their hands frequently, keeping their distance from each other or even having sufficient and suitable medical equipments and supplies to be far from getting infected by this virus, we don’t have enough medical supplies, we don’t have enough water to wash our hands, even we can’t keep our distance between each other because of long lines like food lines, shower lines, toilet lines, market lines, Doctor lines or even ATM line, and the reason is that because it is an overcrowded camp. And at nights I’m facing to the danger of being injured or killed in huge fights between refugees, which keeps me awake for hours at nights. I have to be awake in nights when fights are happening because of my safety.

Three days ago a fight happened between volunteers of Movement and Team humanity, it was a huge fight more than five people were stabbed and police did nothing, later that day at night there was another fight between two Hazara and Panjshiri nations and I am pretty sure more than fifteen people were stabbed that night, in that morning I witnessed cut fingers on the ground.

Is that the how safe Europe is? Is this the humanity they are always talking about?

Please leave no one behind