Check it out
You are here: Home / Action / German asparagus tastes like exploitation – Update on season workers protest in Bornheim

Solidarity with the strike of the harvest workers in Bornheim (near Bonn)! Ultra low wages, mouldy food and no protection from Covid-19. German asparagus and strawberries taste like workers exploitation!

On the ground report by Severin Marten, Alice Claire and John Malamatinas 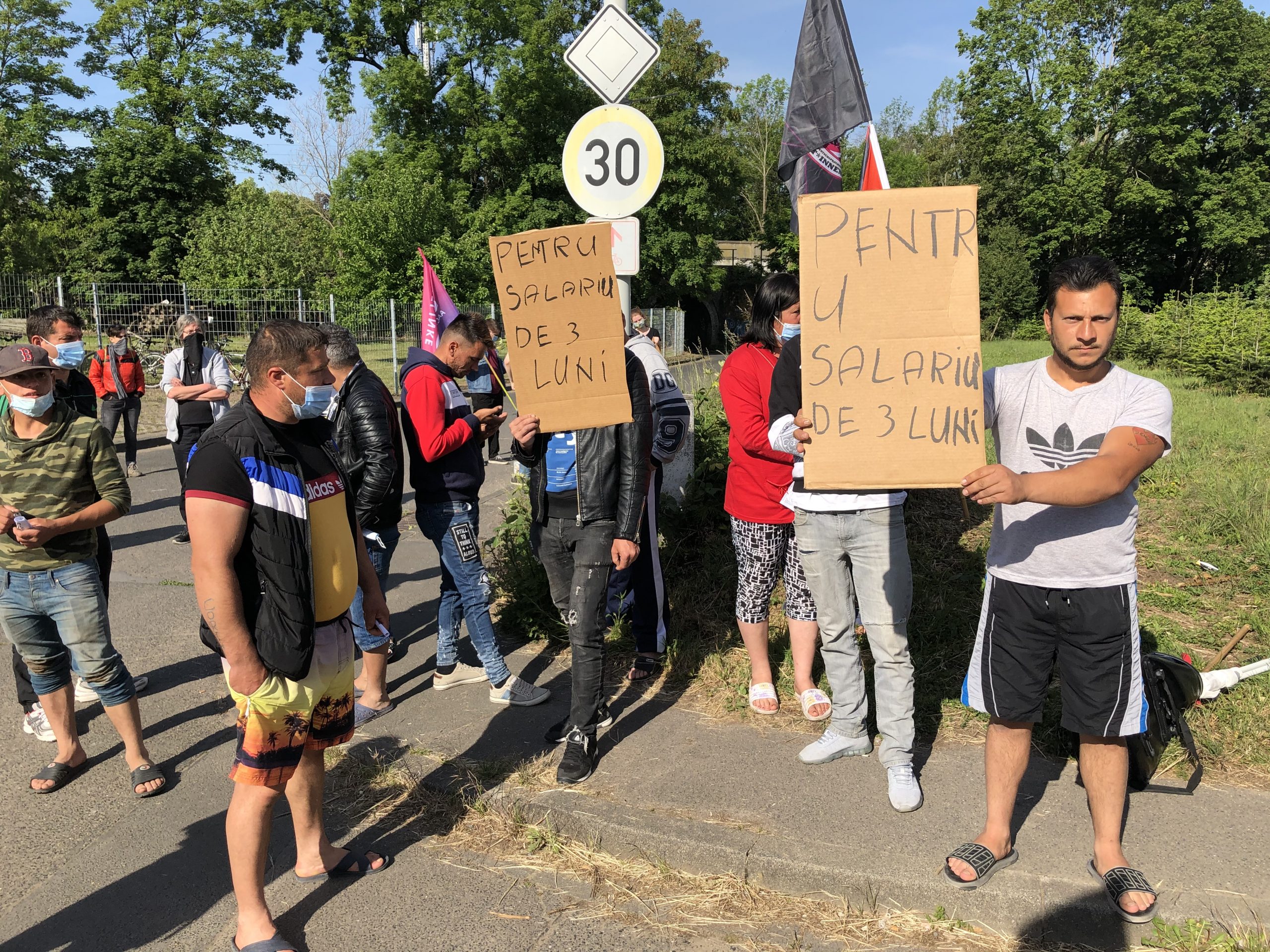 Hundreds of syndicalists and activists expressed on Monday solidarity with the wild strike of the Asparagus harvest workers in #Bornheim between Bonn and Cologne in Germany.

Last Friday hundreds of seasonal workers stopped work on the asparagus and strawberry fields, whereupon the management of the company called the police to intimidate them. Like thousands of other seasonal workers, the harvest workers in Bornheim live and work under catastrophic conditions: The wages of the now insolvent Spargelhof Ritter were kept, the accommodation is under inhumane conditions – an imminent homelessness could be averted. The workers complain not only about mouldy food, unheated mass accommodation next to a sewage plant and a complete lack of protection against corona – but also about not being paid. They had only been paid 100 to 250 Euros for a month of hard work.

The company belongs (or belonged until a few months ago) to the Ritter family, but has been in insolvency administration since the beginning of March. Andreas Schulte-Beckhausen’s lawyer’s office is responsible, and according to media reports it already has a new investor for the large company on hand. In the main season, the farm is said to have employed up to 500 harvest workers in the years before. 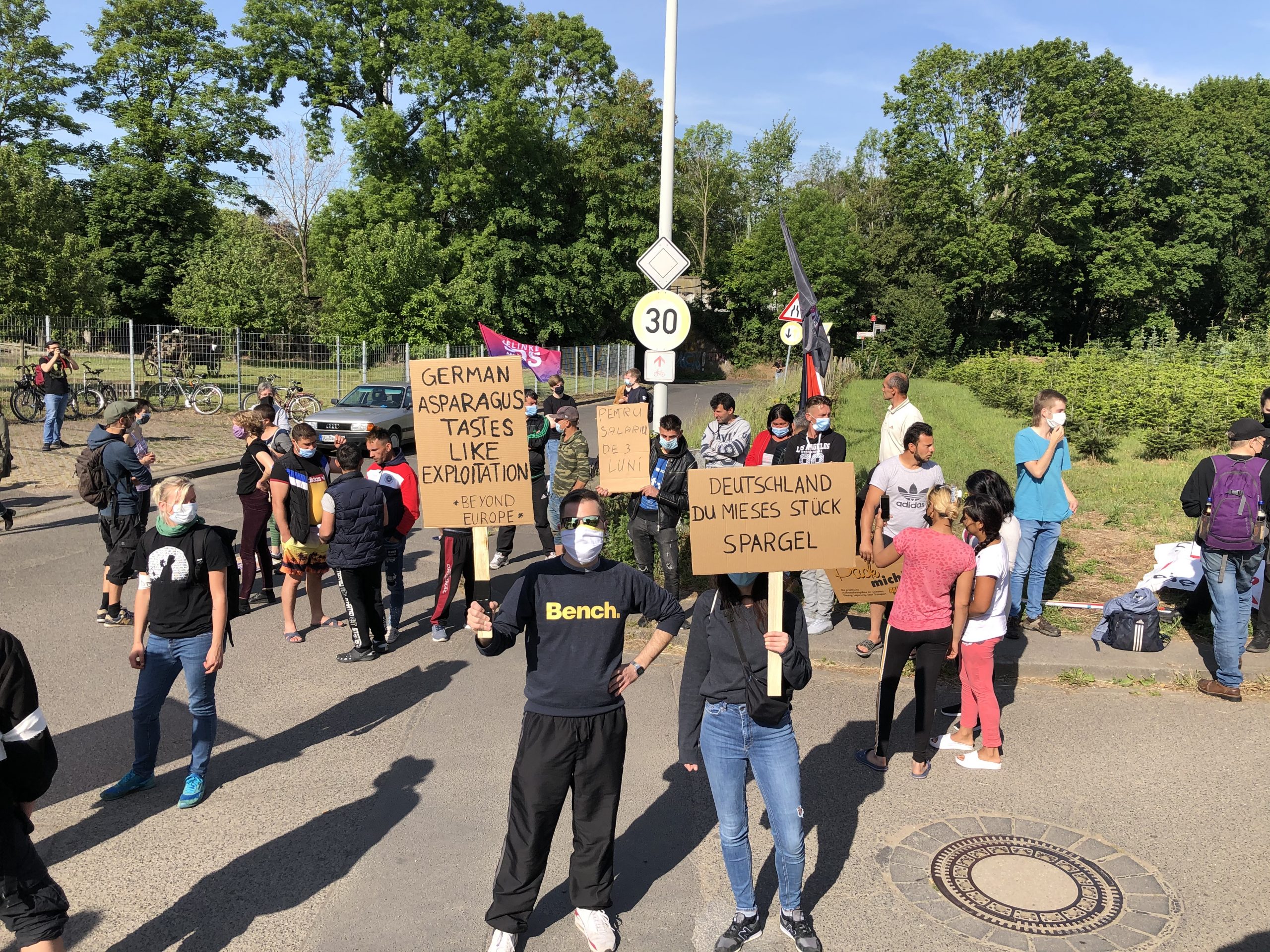 The protest began on Monday at the accommodation containers and continued at the company farm. Tough negotiations were held all day. Around 3 pm the situation comes to a critical point. Suddenly it is said that the payment of outstanding wages should take place on the farm.  A police chain awaits them there, and two security men are also there, who were very aggressive towards union organisers. They say that money should only be given to people who are on an ominous list. The assumption was obvious that the strategy of the insolvency administrator was to set the employees against each other, in which some paid 600 Euros and others only 50 or 70. The lawyer from the insolvency administration came out and sat in the car. He drove away. People were yelling that they want their money. The police protected the car and partly took action against the field workers. Outrage reigns.

Where the isolation of the migrant workers from the rest of the world usually leads to that this over-exploitation being largely ignored, the joint organisation with FAU Bonn was able to cause a nationwide sensation. It was a difficult day as FAU Bonn tweets: “A bone-crushing day draws to a close. Even if we cannot be satisfied with the result: that wages of a few hundred euros were paid at all is a panic reaction of the class enemy. Tomorrow is round 2.” 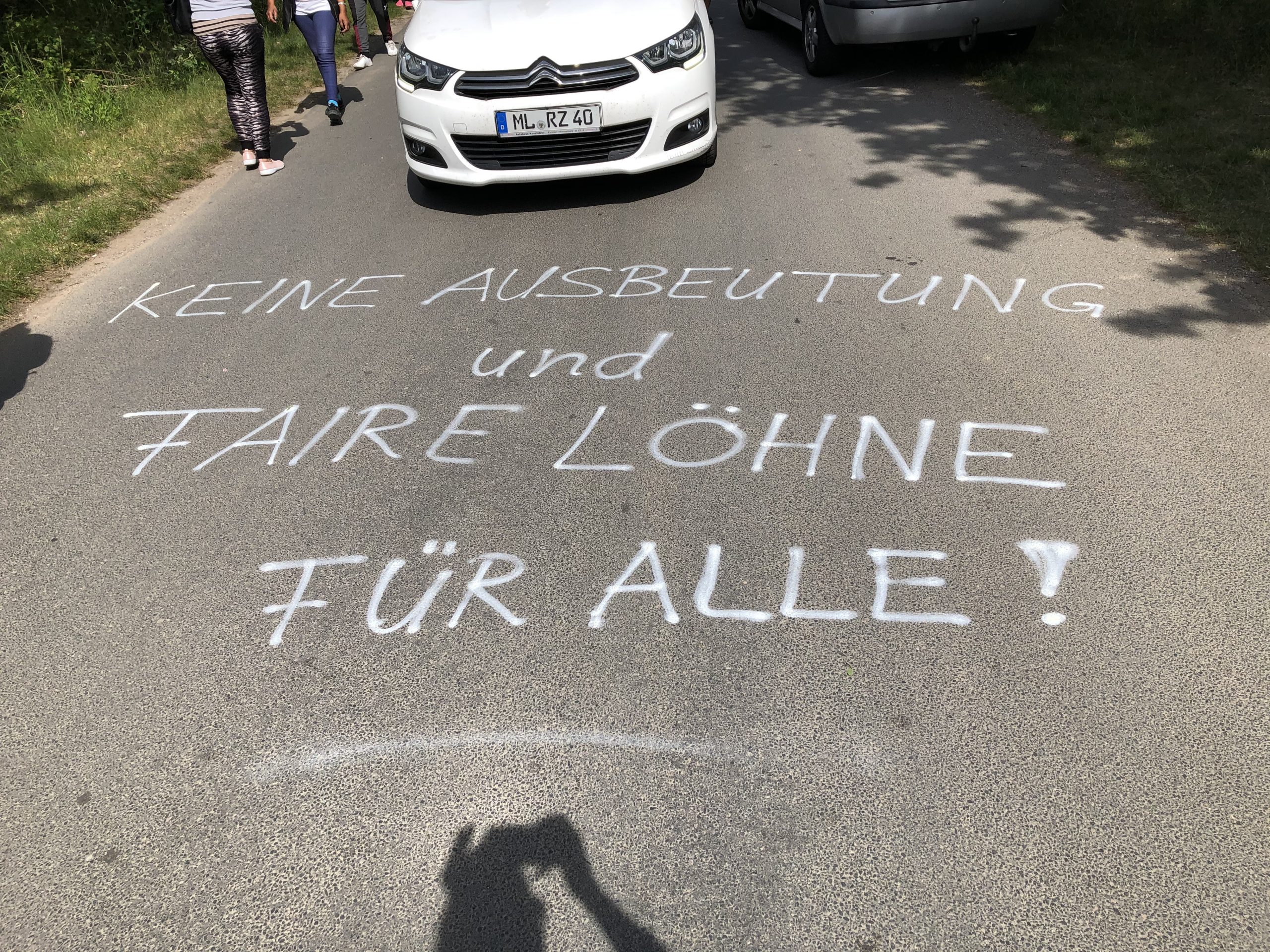 German agriculture is largely based on low-wage work performed by migrant workers. About 300,000 seasonal migrant workers come every year to Germany to work in the fields. Shifts of 14 hours, seven days a week for unhealthy heavy work are not uncommon. They work and live under catastrophic conditions and are mostly isolated from the outside world from the time they are picked up and taken to their accommodation in order to maintain the over-exploitation of migrant labour.

Now it is important to continue to maintain solidarity with the workers and not to be satisfied with the payment of small amounts of money.

Therefore, come to Bonn (Oxfordstraße 2) tomorrow at 10 a.m. in front of the seat of the insolvency administration, which is in charge of paying out the wages.

Germany you lousy piece of asparagus! 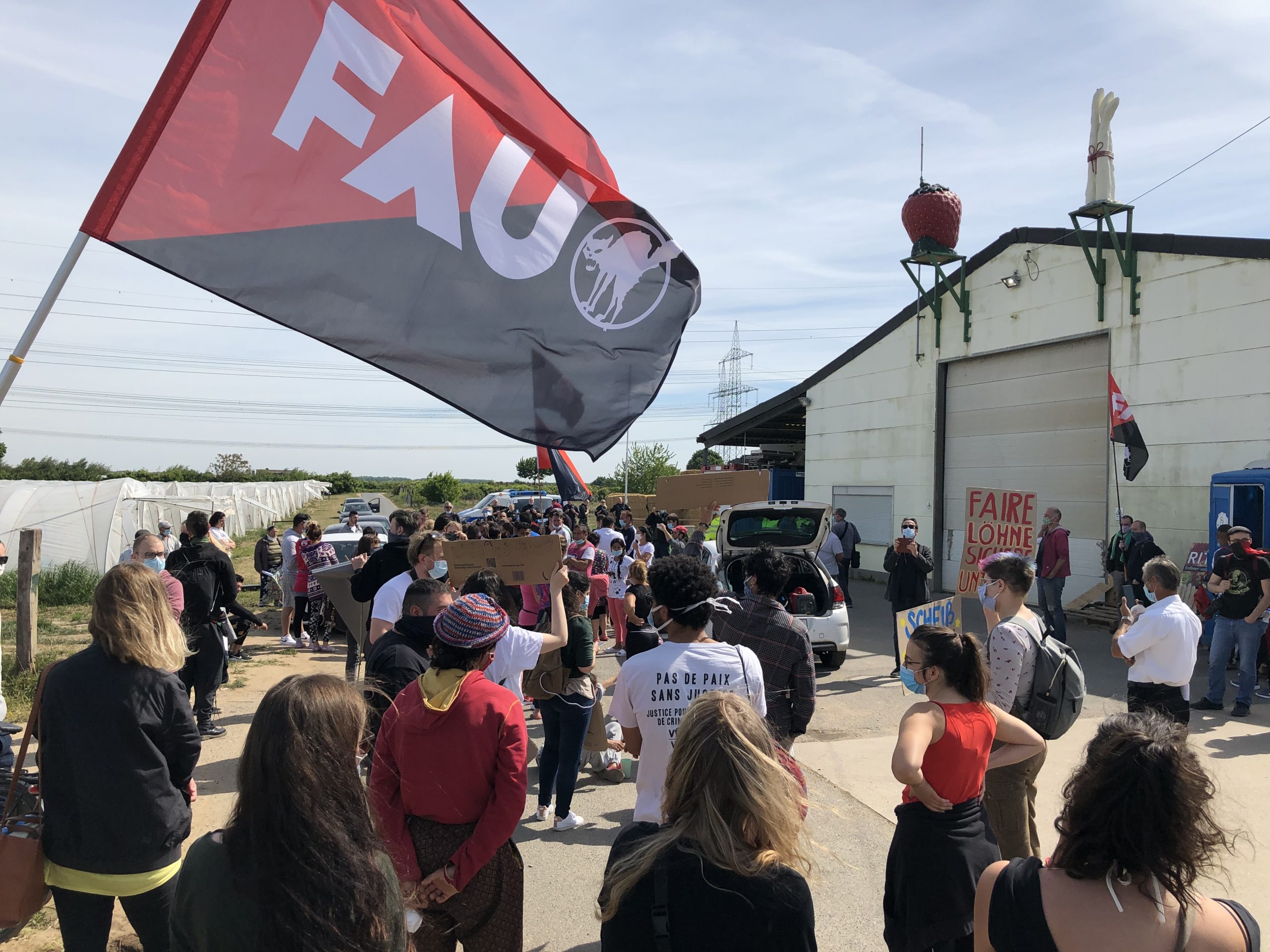