Check it out
You are here: Home / Antiauthoritarian Movement / The saviour will not come from above – Leave no one behind

It was not a coincidence that we chose the building at Nikis Av. 39 in Thessaloniki to hang this banner. We are political emotionally attached to it. It was the home of a few of us, till it was evacuated -simultaneously with two other squats- from the cops of the leftist Syriza government at the 2nd July 2016. The common ground of these three squats was the fact that refugees were living inside. Syriza prepared the ground for the rightwing
neoliberals of New Democracy to continue on the way to the totalitarian management and re-contextualisation of the migration issue from the side of the state. From the human living conditions, „we live together-we fight together“ and the mutual aid to the hells-on-earth of the detention camps. 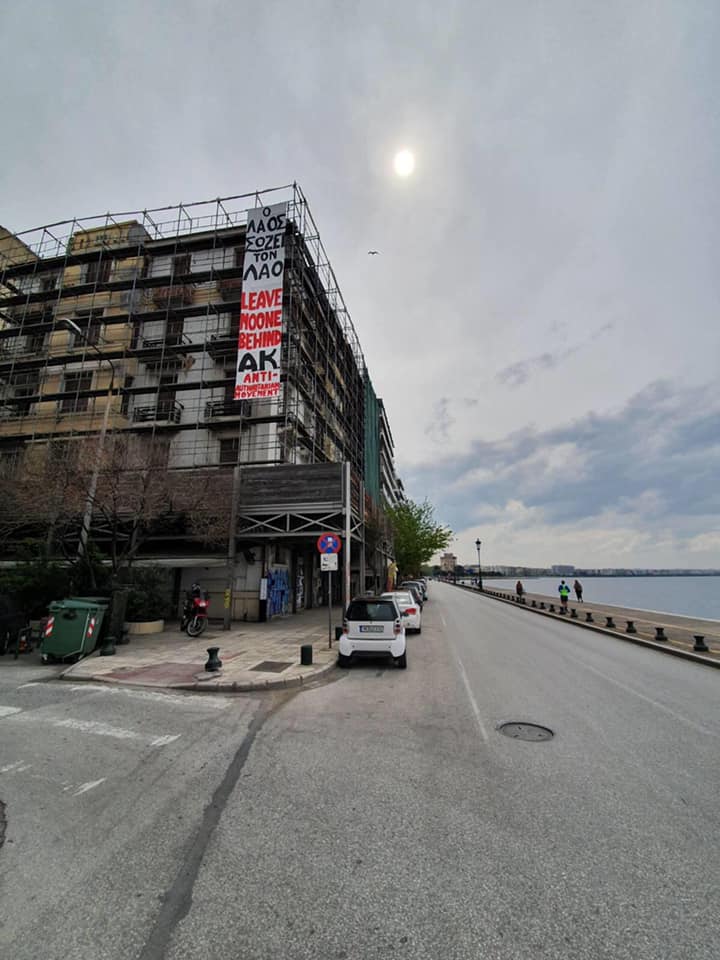 What about now with the #stayathome dogma and the orders to keep the right safety distances? All these apply only to those that have a home and not the ones that the state chooses to make invisible. Homeless, refugees and prisoners are being abandoned completely and left to die during the pandemic. But also a lot of people that have a home right now, watch their housing situation becoming more and more fragile. We had felt the housing crisis deepen also before the pandemic. The rents were exploding due to gentrification, the extreme touristification and the short term rentals. The auctions of the first residence are also about to start. The real estate capital smells money and views our houses and neighbourhoods as investments with the blessings of the state, which can only be happy to see the creation of whole territories populated by individualised, flexible human consumers. The fact that our house remains empty after 3,5 years -along with thousands of buildings around the world- strips down the irrationality and violence of state and capital.

In the upcoming extreme poverty we ought to deepen the mutual aid political proposal that came up due to the pandemic. We will either move as a collective or the law of the jungle, hence the law of the market and the dehumanisation will dominate. We have to take roots in our neighboorhoods and from there start to imagine another world, where no one is being left behind.