Check it out
You are here: Home / Featured / Riots after Villeneuve la Garenne’s injury: The people are fed up!

English translation of an article by the comrades from Désarmons-les.

Villeneuve-la-Garenne has been on fire since Sunday evening. The revolt erupted after a city resident, Mouldi, crashed into the door of an unmarked Passat police car, stopped at a traffic light, Saturday night around 10 p.m. on Verdun Avenue.

In the police car were four officers from the Anticriminality Brigade of the Hauts-de-Seine district, who had noticed Mouldi while he was driving without helmet on a motocross. When Mouldi arrived next to the vehicle to overtake it from the right by taking the cycle lane, one of the passengers, who nevertheless observed him in their rearview mirror and could not have missed his arrival at full speed, opened the door, throwing Mouldi onto a sidewalk pole. Note that the car was unmarked, so that Mouldi could not know that it was a police vehicle. 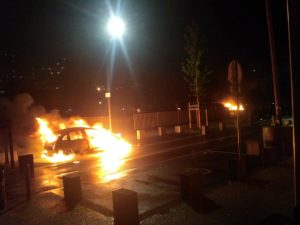 Direct witnesses present at the scene filmed the following minutes and posted the videos (two different angles) on Snapchat. We can see Mouldi screaming in pain, while a policeman bandages him a meter from the pole on which he landed. His motorcycle is a few meters further on the sidewalk, while three other police officers go back and forth between Mouldi and their vehicle. One of the witnesses will testify later that one of the officers was drunk, claiming that the door was opened voluntarily when the motorcycle arrived. Witnesses initially believe that Mouldi lost his leg. Treated in hospital, he suffered an open fracture of the left leg, but fortunately was not amputated.

The next morning, another video taken from the gas station adjacent to the accident site, shows police taking away the pole on which Mouldi was thrown the day before. The prosecution says that no internal affair’s investigation has been carried out so far, but the press claims that an investigation was opened against Mouldi for “urban rodeo” [illegal motorcycle race] and “endangering others”. The investigation is being conducted by the local police department, that are the direct colleagues of the police officers involved in the accident. An investigation is also conducted against the witnesses for “Contempt, threats and insults against persons holding public authority”.

Who cares if Mouldi had a criminal record? With this repressive state, tens of thousands of us have a criminal record, for various reasons. That will never justify police officers beating, maiming and killing even just one of us.

In the night from Sunday to Monday, it was not only the districts of Villeneuve-la-Garenne that erupted with anger, but also many districts of Nanterre, Suresnes, Aulnay-sous-Bois, Egly, Gennevilliers, Epinay, Grigny, Fontenay, Saint-Ouen, Villepinte, Neuilly-sur-Marne, Amiens Nord, Rueil-Malmaison, Noisiel, Mulhouse, Sevran, Evry, Strasbourg, La Courneuve, Neuilly-Sur-Marne, Chanteloup, Bordeaux, Toulouse: trash fires, fireworks and barricades on one side, facing tear gas, rubber bullets and grenades on the other. There were also violent arrests of independent journalists, a practice that has become common among police officers who are clearly to blame…

These outbursts of anger are not only the result of the Mouldi accident, but follow the constant controls, humiliations and violence suffered by residents of working-class neighborhoods, especially since the beginning of the curfew. This anger is political.

Six deaths at the hands of the French police in two weeks!!

We associate ourselves with the anger of the rioters, who are only reacting to this systemic and racist violence that floods our daily landscape, with social networks allowing witnesses to instantly broadcast footage of police actions in working-class neighbourhoods. These images will not do justice, but they at least allow us to establish the truth and to take a critical distance from the official version served by the perpetrators of these acts and the prosecutors who systematically organize their impunity.