Check it out
You are here: Home / Exchange / Gasoline price increase: nationwide protests in Iran

Some quick, classifying thoughts on the recent wave of protests in Iran by Kian Zeytani

In the late 21st century, the restriction of mobility (prices for petrol or for local public transport) seems to be a global door opener for extensive system-critical revolts and uprisings by workers and the precarious. After Mexico, Haiti, France and Chile, another country is now joining this series: Iran.

A few days ago, President Hassan Rouhani made a fateful announcement: As of Friday midnight, the subsidies on gasoline prices will be cut nationwide, doubling the litre of gasoline and later tripling it. 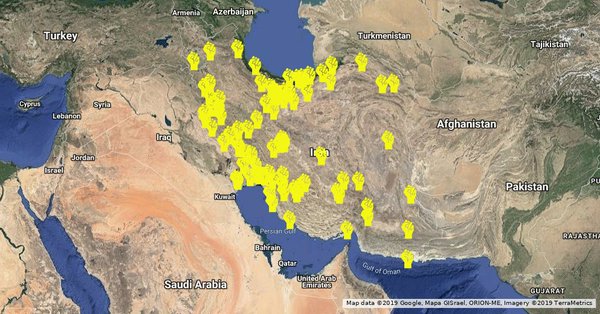 A few hours after the announcement, militant protests were ignited in several cities. In the form of rallies, demonstrations, street blockades, attacks on petrol stations, government symbolism, banks, police stations and security forces, the many thousands of people in almost 50 cities* throughout the country expressed their displeasure. Today, the important and symbolic bazaar in Tehran has gone on strike in solidarity with the protests. Around 1000 people have been arrested, at least twenty killed. The Internet, the most important news and mobilization tool in the totalitarian country, especially in the form of social media, has virtually been shut down. The balance of the first 24 hours shows that Iran is currently experiencing the fiercest protests since the revolution in 1979 – some even claim that things are more cheerful than in 1979.

The slogans and the goals of the actions show quite clearly: the rising gasoline prices are only the drop that causes the boiling powder keg Iran to overflow again. For years, a sometimes radical protest cycle in Iran has been solidifying and intensifying, in which anger and frustration about living conditions that are difficult to endure become visible: economic recession, lack of wages, neoliberal cuts in social benefits, authoritarian access to everyday life, increasing repression, corruption, military sword rattling and simply no perspective at all – especially among the working class and the inflated precarious sector, but also among large sections of the middle class. All those are these days again the actors of the uprising, who themselves say they have nothing to lose, which is why they risk their lives and take to the streets against the oppressive life situation in the Islamic republic.

This is expressed in slogans like “Down with the dictator”, “We do not want an Islamic republic” and even “Death for Khamenei” (revolutionary leader and highest authority in the Islamic republic). In other slogans the demonstrators criticize the millions in state support for the regional ideological allies like in Lebanon, Syria or Palestine, while their own people starve to death and slip into more and more misery.

There are reports that the government wanted to reverse the petrol price increase because of the violence of the protests. After an address by the revolutionary leader, in which he acknowledged this step as a necessity against the economic recession and denounced the demonstrators as “hooligans” and “agents provocateurs”, this measure was carved in stone and thus remains intact for the time being. Therefore, a confrontational, repressive and (even more) murderous response by the state apparatus is to be expected again. But the power bloc is not as homogeneous as the supreme revolutionary leader would like it to be. There are even supposed to be anonymous statements of solidarity with the protests from circles of security forces and quite specifically from the political, economic and military power bloc in Iran, the Revolutionary Guards. However, these reports should be treated with caution, because the traditionally conservative Revolutionary Guards are in conflict with President Rouhani, who is regarded as a reformer, and each has its own interests. Nevertheless, if the otherwise violent government is not a threat. 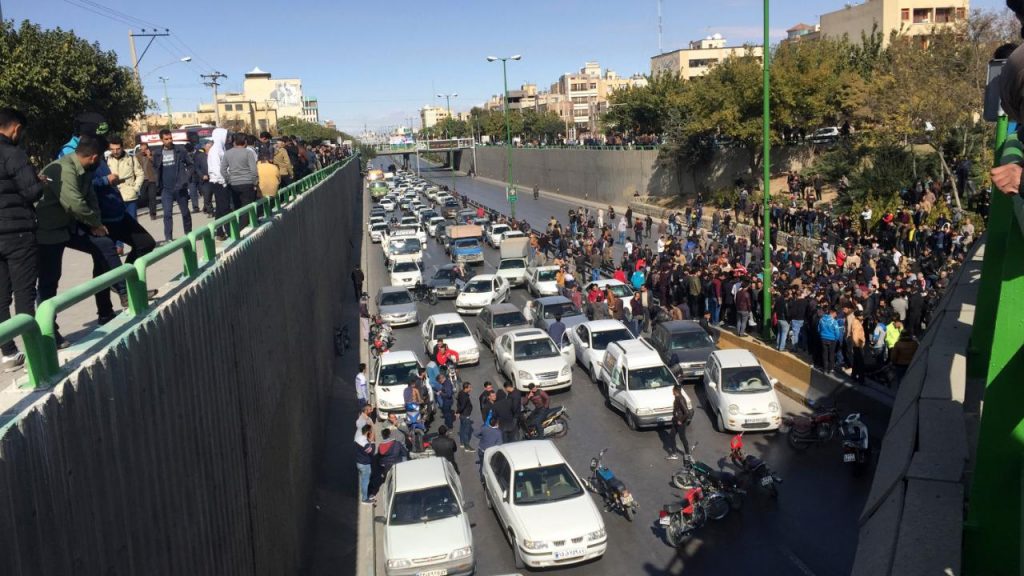 But the power bloc is not as homogeneous as the supreme revolutionary leader would like it to be. There are even supposed to be anonymous statements of solidarity with the protests from circles of security forces and quite specifically from the political, economic and military power bloc in Iran, the Revolutionary Guards. However, these reports should be treated with caution, because the traditionally conservative Revolutionary Guards are in conflict with President Rouhani, who is regarded as a reformer, and each has its own interests. There are also very practical problems: Iran is mobilizing ideologically loyal Shiite militias from surrounding countries, such as Lebanon and Syria, to smash the protests. Due to the complex regional situation, however, these troops are involved. In addition, they cost money, which the state does not always have. All this could strengthen the dynamics of the protests and, above all, create the self-confidence needed in a totalitarian state to stand on the right side. After all, it takes patience, because the Islamic Republic has been tried and tested in insurrection and is firmly in the saddle despite all the problems. However, nothing is forever.

*A list of cities in Iran involved in the protests is circulating in telegram channels: